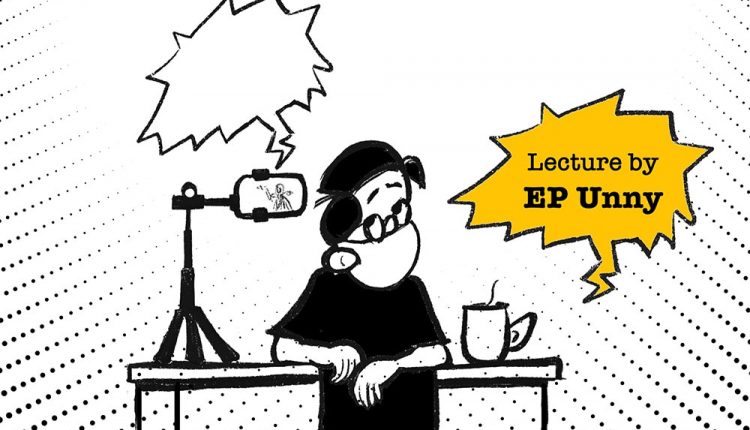 New Delhi: KNMA will host ‘Discovery of India Through its Cartoons,’ a public lecture by senior political cartoonist EP Unny. This lecture has been organized as a part of Museum Week. Like cricket and the English language, cartooning came to us from the British. A colonial legacy, newspaper art was ironically a component of the free press that the British took pride in. Cartooning is often seen as an index of democracy. Take this opportunity to discover the world’s most populous democracy is through its cartoons, guided by expert cartoonist EP Unny.

Born in 1955 in Palakkad, Kerala, EP Unny completed a degree in physics before working briefly as a banker. His interest in cartooning saw fruition with his first cartoon published in Shankar Weekly in 1973. He became a professional cartoonist in 1977 by joining The Hindu as a Staff Cartoonist in Chennai. After 12 years with The Hindu, he moved to Delhi and joined The Sunday Mail and then went on to work with The Economic Times from 1993 to 1996. Unny eventually joined The Indian Express as the Chief Political Cartoonist. He has published several books and graphic narratives including Spices & Souls, A Doodler’s Journey through Kerala (2001); Language, Landscape & Livelihoods, Sketches & Notes on Five Drought-prone Districts of Andhra Pradesh (2003); Business as Usual, Journey of the Indian Express Cartoonist (2009); Santa and the Scribes: The Making of Fort Kochi (2014); RK Laxman: Back with a Punch (2022); Serialised Free India, A Graphic Novel (2007) and Of Ghosts and Writers: A Graphic Story (2004). He was felicitated with the Lifetime Achievement Award by the Indian Institute of Cartoonists in 2009.

The Kiran Nadar Museum of Art

Established by art collector Kiran Nadar in 2010, the Kiran Nadar Museum of Art (KNMA) is the first privately-funded museum of art exhibiting modern and contemporary works from India and the sub-continent. Located in New Delhi NCR, India’s capital city, KNMA hosts an ever-growing collection of artworks that both highlights a magnificent generation of 20th-century Indian painters from the post- Independence decades and engages with the different art practices of younger contemporaries. Sponsored by the Shiv Nadar Foundation, KNMA is focused on bridging the gap between art and the public and fostering a museum-going culture in India. KNMA aims to become a place for confluence, dialogue and collaboration through its curatorial initiatives and exhibitions, school and college workshops, art appreciation discourses, symposiums, and public programs.