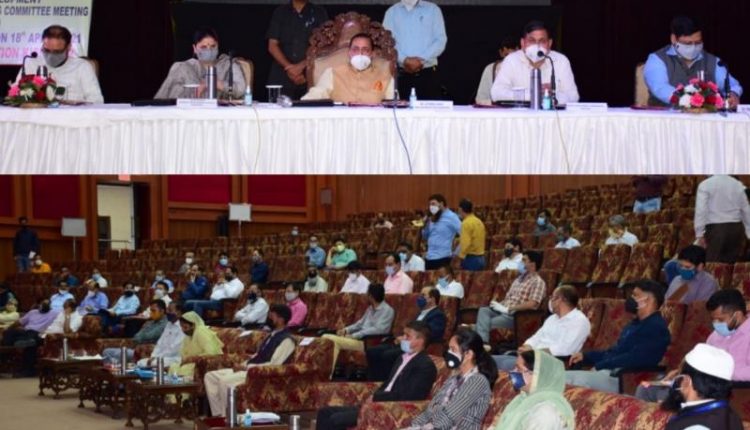 At the outset, the DDC Kishtwar gave a detailed presentation on various centrally sponsored schemes being implemented in the district.

Listing mega development projects, he informed that land measuring 526 kanal has been identified for developing Airstrip, while 100-bedded hospital under the Prime Minister’s Development Package, PMDP is also nearing completion. He also shared status of ongoing works on the SC Hostel.

The DDC informed the Union Minister that contractors have been sternly directed to complete pending works under phase 1 and phase 2 of Pradhan Mantri Gram Sadak Yojana (PMGSY) scheme.

Inquiring about rural area specific development schemes, Dr Jitendra Singh said that Sarpanchs and Panchs have been mandated to set priority of works under PMGSY and other schemes.

Dr Jitendra Singh directed the DDC to stay vigilant about the second wave of COVID-19 pandemic and prepare the district for the challenges accordingly. He asked the public representatives to educate the public about PMGSY-SEHAT scheme, while directing the district administration to promote the same through short video messages.

Responding to the insufficient power supply in the district, Dr Jitendra said that recent MoUs, signed by the Government, for execution of Pakal Dul, Rattle and Kiru hydro electric power projects would make the district power surplus in upcoming years and therefore eliminate all power woes. He informed that the move is an unprecedented one since independence and would lead to generation of numerous jobs.

Underlining the necessity of creating maximum jobs, Dr Jitendra Singh said that agencies executing the HEPs have been asked to hire local workforce on priority, particularly the unskilled. It is pertinent to mention that the 1000 MW Pakkal-Dul is the biggest power project of Jammu & Kashmir under execution in District Kishtwar.

Highlighting the government’s intentions about development of the region, the Union Minister said that the Degree College for Padder was approved by the government under the Rashtriya Uchhtar Shiksha Abhiyan, RUSA. He also advised the district administration to promote organic farming in the district and showcase the products to encourage more farmers.

Responding to the issues raised by BDC Chairpersons and other PRIs, Dr Jitendra Singh acknowledged that the district has a lot of potential for tourism development and said that his priority would be to provide basic amenities enroute Machail Yatra track and other prominent places of the district. He also informed them about the Saansad Adarsh Gram Yojana.

Dr Jitendra Singh sought status of works being done under the Deen Dayal Upadhyaya Gram Jyoti Yojana and the Har Ghar Nal Se Jal programme, under Jal Jeevan Mission, and asked the public representatives to actively participate in implementation of these ambitious programmes for their successful implementation on the ground.

He also sought the cooperation of elected representatives of all the 3-tier Panchayati Raj institutions in the timely execution of various prestigious projects like Development of Saffron Farm, Zeera farm, air strip and AYUSH Hospital among others.

The BDC Chairpersons also raised issues of their respective blocks and sought the district administration’s cooperation in their resolution.

Speaking at the meeting, the DDC Chairperson said that it would be her endeavour to deliver the benefits of centrally sponsored schemes to each and every deserving individual of the district and sought support from the district administration.