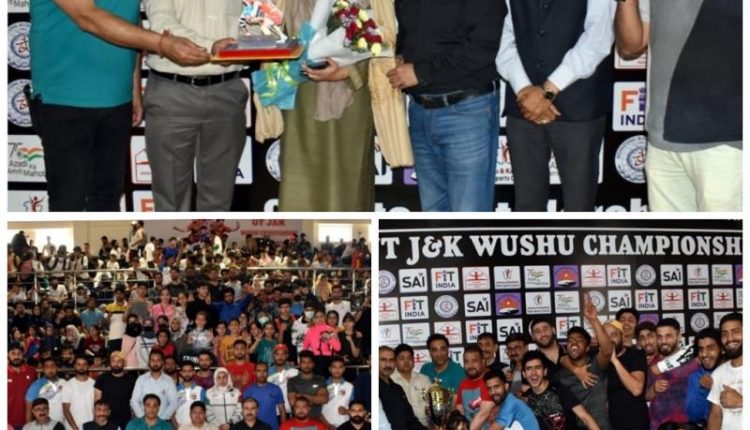 In all, 850 players drawn from the majority of districts of Jammu & Kashmir along with 200 officials took part in the event.

Dr. Raghav Langer was the chief guest on the occasion, while Secretary J&K Sports Council, Nuzhat Gul was the guest of honour and Ace Sports Administrator and Vice President J&K Wushu Association, Ranjeet Kalra was the special guest.

Speaking on the occasion, the Divisional Commissioner said that Wushu is one of the prominent medal winning sports disciplines. He praised organisers for a well conducted event.

He further said the game of Wushu has brought many laurels to J&K and the country. It has produced stars like Kuldeep Handoo, Bhanu Pratap Singh, Rajinder Singh and more recently Sadiya Tariq, who won a medal in Moscow Wushu Stars and her achievement was lauded by even Prime Minister of India and LG Manoj Sinha.

Dr Langer also felicitated and honoured Secretary Sports Council Nuzhat Gul for her extraordinary leadership and contribution for promotion and propagation of sports in J&K.

Terming Secretary Sports Council as a progressive leader, who has been successful in bringing a visible change in the sports scenario of J&K under the leadership of LG Manoj Sinha, the Divisional Commissioner also appreciated the positive contribution of Sports Administrator Ranjeet Kalra and Dronacharya Awardee Kuldeep Handoo towards sports.

Earlier, Secretary J&K Sports Council, Nuzhat Gul, in her address gave an overview about the achievements of the Sports Council and Wushu Association of J&K.

Ranjeet Kalra, Vice President Wushu Association of J&K, in his address, thanked the Divisional Commissioner for his continuous sport to sporting initiatives and his constant monitoring and review of new sports projects underway in Jammu province.

Showering generous praise on Kuldeep Handoo, Kalra termed him an icon of the game of Wushu in J&K.

Earlier, the players presented a Wushu demonstration which was appreciated by the audience.

Surya Bhanu Pratap Singh, Asian Games medalist and District Secretaries of Wushu Association of J&K were also felicitated by the Chief Guest on the occasion.

The proceedings of the closing ceremony were conducted by columnist and anchor, Rajesh Dhar.