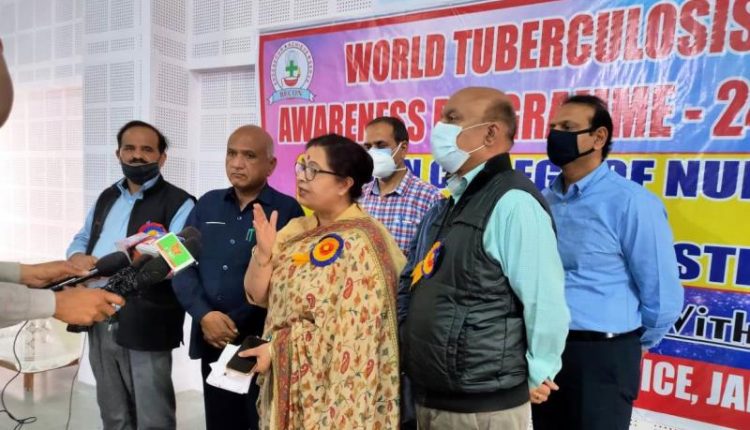 The Programme started with prayers and lightening of lamp by the dignitaries along with DTO, Jammu, Dr. Meenakshi Kotwal.

The DTO presented a power point presentation on the achievements of DTC, Jammu under National Tuberculosis Elimination Program (NTEP). She presented the comparison of three years of the programme, and the targets set for the year 2021 and the achievements. She gave details of the hard efforts put in by the soldiers of DTC Jammu specially in the Covid 19 situation.

Chief Medical officer Dr. JP Singh, in his address, spoke about the Tuberculosis disease and its prevention and appreciated the work done by DTC, Jammu.

The ADDC, Jammu also appreciated the efforts of DTC Jammu and wished Team DTC all the best to achieve the target of elimination of TB till 2023.

The Chairman DDC assured DTO, Jammu that his council will definitely reach to the unreached blocks. Students performed on the theme based song written, composed and sung by the DTO Jammu, Dr. Meenakshi Kotwal, which was launched on 15th August on the eve of Independence Day2020.

A cultural program featuring beautiful skit on Tuberculosis, Dogri and Kashmiri dance performance were also presented by the student of Nursing Institute.

Later, the best three Tuberculosis Units were declared. Best ACSM activities performer was also declared and honored by certificates and mementos. All DTC Staff members were felicitated with certificates for their best efforts. The Students, staff and principals of BEE ENN Nursing College and Nursing school extended full cooperation in spreading the message of “TB HAREGA, DESH JEETEGA”.