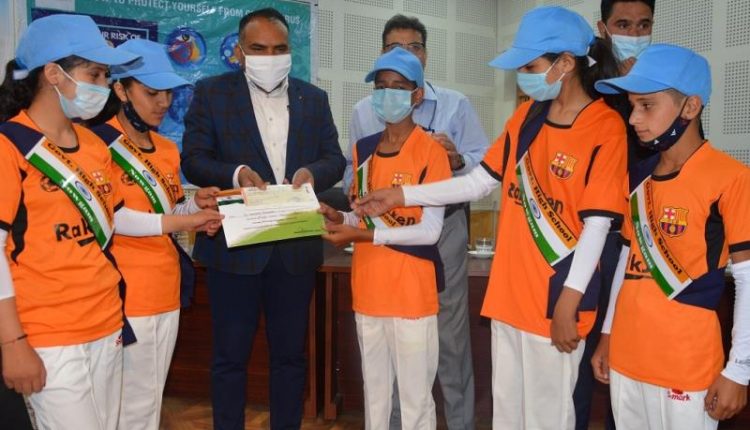 On the occasion, Divisional Commissioner (Div Com) Kashmir, Pandurang K Pole who presided over the function as chief guest distributed certificates and cash prizes among the winners at both divisional and district level.

Speaking on the occasion, the Div Com lauded the role of DIPR for holding such a series of events successfully. He said that the competition attracted huge participation from all districts of Kashmir and both male and female students participated with great enthusiasm.

He said Kashmiris are as patriotic as people in other states of India and have served the Nation on all fronts and have won gallantry awards while serving in army and police.

The Div Com said that on the 75th Independence Day, the National Flag was hoisted at more than 7000 places here.

He congratulated the winners and said that Kashmir is fertile in art and literature and providing a conducive atmosphere and better platform to the upcoming young artists is the need of the hour. Inculcating the real essence of patriotism in our young generation will definitely yield fruit in terms of national integration, peace harmony and tranquility in near future.

During the program, the students of different Educational Institutions who participated and were declared winners of the National Anthem singing competition at Divisional level and in the district Srinagar were also felicitated.

At the outset, the Artists of the Cultural Unit Srinagar of DIPR presented thematic songs related to Covid-19 awareness and Safety Protocols to be adopted to fight any possible third wave as predicted by health experts.

The winners of the National Anthem singing Competition also showcased their talent on the occasion and enthralled the audience with their individual performances.

It is pertinent to mention that as a part of celebrations of 75 years of independence, the Jammu and Kashmir government had announced a National Anthem singing competition 2021 for the first time in J&K.

Commemorating Azadi Ka Amrit Mahotsav, Lieutenant Governor of UT Jammu and Kashmir had announced individuals and groups to participate and the entries were open from first to 7th August 2021.

An overwhelming response was witnessed while receiving the video clips of individuals and groups from every nook and corner of UT.

In the first phase district level competition was held and 90 finalists were shortlisted for 3 categories i.e. 13-18, above 18 and groups respectively from all the districts of Kashmir only.

The final selection was made by a professional Jury at the Joint Directorate of Information Kashmir with the consent of Divisional Administration Kashmir and 9 winners in three categories were selected on the basis of voice quality, pronunciation, presentation and timing.