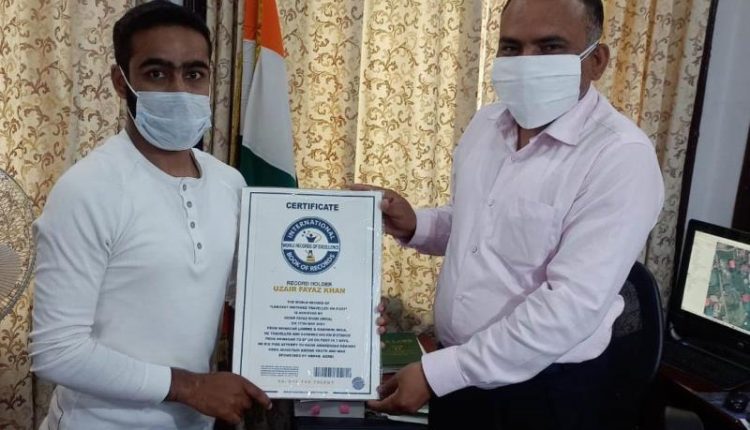 Appreciating Uzair, Div Com congratulated him for creating history and registering his name in the International and Indian Book of Records.

He said that other youth should learn from Uzair that with determination and hard work anything is possible like Uzair proved by covering such a long distance on foot in recorded time.He said that Uzair deserves applause and Administration is always on forefront to provide them the support they need.

25- year- old, Uzair of Nowhatta Srinagar a student, pursuing B.A in Psychology at Amar Singh College had always been interested in running and taking part in marathons, since his school days.

Before taking this challenge of running from Srinagar to Delhi, Khan claimed to have undergone rigorous 7 months long training.

He said that the motive of the run was to create anti-drug addiction awareness among youth.

Khan started his journey from Bakhshi Stadium Srinagar on April- 2 and finished it at Rajghat Delhi on April- 8, 2021.

He said that he has also participated in marathon runs from Srinagar to Sonamarg, Gulmarg and Pahalgam earlier.

He said that the run to Delhi was not an easy task as he faced many challenges including, climatic conditions, foot injuries and other difficulties on the way, but he kept on taking steps without any regrets or remorse to reach his goal.

Khan said that he has been supported by Abraq Agro and Divisional Administration Kashmir.

After making a record, Khan applied for registration for International Book of Records, Indian Book of Records and World Records India out of which he has got the two successfully.

‘I will continue taking on new challenges and register for the Guinness Book of World Records also,’ said Khan.

He said that through this run he wanted to give a strong message to all those youth involved in drugs that ‘nothing is impossible’.

‘It is disheartening to see our youth falling prey to drug menace. I was carrying a small banner all along to create awareness on drug abuse. I wish our youth who have become addicts quit the wrong practice and get a new hope of living a better life again,’ added Khan.

Khan further expressed his gratitude to all who supported him during his run to Delhi.