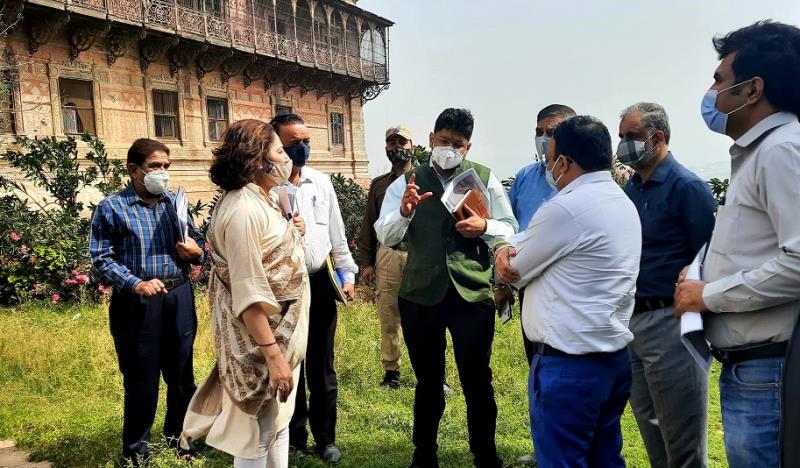 At the outset, the Divisional Commissioner held a meeting with concerned officers and the Executive Director gave a detailed PowerPoint presentation on the achievements and progress made in the restoration of the Royal Heritage Complex. It was informed that the work has been executed on various components of the project and the work on Army Head quarter and Platform has been completed while work on Royal Court, Gadvai Khana is in progress under JKIDFC.

She shared the future work plan, proposed sources of funding and also apprised the Divisional Commissioner about the minor bottlenecks.

The Divisional Commissioner directed the concerned officers to ensure that all the executed works were completed within fixed timelines. He also instructed the Executive Director to hold a review meeting with contractors, consultants and resolve all the minor issues which are hampering the work progress.

The Div Com took a round of various sections of the Mubarak Mandi Heritage Complex and inspected the progress and quality of work. The segment being renovated by Archaeological Survey of India was also examined in detail. He observed that the complex is expected to become a major tourist attraction of Jammu City. He instructed the executing agencies to take special care to maintain the glory of the prestigious complex.

He instructed the concerned to identify space for development of parking places outside the complex besides exploring excess points from circular roads. Directions were given to the consultants of Smart City Project to formulate the ancillary work plan around the Heritage Complex.

Later, the Divisional Commissioner visited Jambu Zoo at Nagrota and inspected the ongoing works there.

The Wildlife Warden gave a detailed presentation on the works completed so far, works in progress for Phase-I. It was informed that work is in progress on various components including parking area, Veterinary Hospital, staff quarters, Kitchen, feed store, Cafeteria and main entrance gate.

He further informed that the main attractions in Jambu Zoo are Asiatic Lion, Royal Bengal tiger, Black Beer, Marsh Crocodile and Black bugs. “It will also have reptile chambers hosting the poisonous and non-poisonous snakes. The Zoo will be one of the biggest in north India,” he informed and added that it will also have an open amusement theatre and park for children. The zoo will have battery operated cars and bicycles for the visitors to move around.

The Div Com directed the concerned officers to expedite the progress of work and ensure timely completion of all the under execution works as both the projects have huge potential and will become major attraction in future.