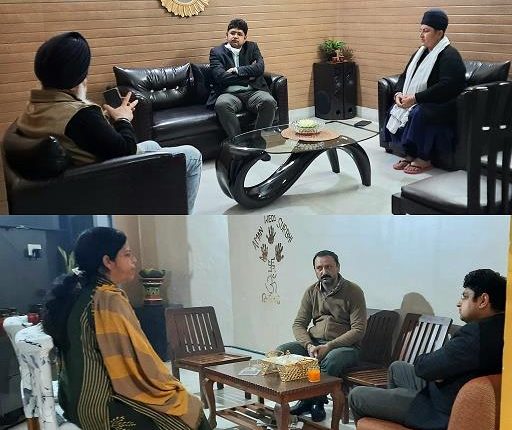 Assures their safe evacuation by the Union Government

The students, Jasleen Kour and Osheen Sharma along with other students/residents are in a transit towards borders of adjoining countries and are expected to reach home soon.

During his visit to residence of the twin students at Channi Himmat and Paloura, the Div Com interacted with their families and enquired about their well being. He assured them that their children are being brought back under Operation Ganga by the Government of India.

The Div Com explained that the Union Government is making every effort for safe evacuation of all Indian students from the war torn country. “Thousands of Indian students/residents have already reached home safely, the rest will also be united with their loved ones soon,” he assured.

Dr Raghav Langer said that the whereabouts of the students are being closely tracked by the highest echelons of Union Government and all efforts are being made for their safe evacuation.

The Family members informed the Div Com that they are in regular touch with their daughters and are desperately waiting for their return. “She is travelling in a convoy of five buses and families of all the students are in touch with their children, as we have created a WhatsApp group of all the families whose wards are traveling in these buses towards Romania border”, one of the family said.

The Div Com expressed solidarity with the families and prayed for their safe onward journey. He also lauded these young medicos for their bravery & high morale in striving through the extremely difficult situation.

The J&K Govt has established a help desk at the New Delhi Airport to provide assistance to the evacuees from Ukraine.

The staff of Resident Commissioner Office in New Delhi are assisting the returnees by all possible means on their arrival. Boarding and lodging arrangements have also been made for those staying over in New Delhi.

Moreover, Air Tickets are being provided to the evacuees as per their requirements for their onward journey to Jammu and Srinagar by the J&K Government.

Divisional Administration Jammu has been in constant contact with the families of these students and residents for any assistance and support. All Deputy Commissioners of Jammu Division have established helpline numbers for the Ukraine returnees & the field officers are visiting them frequently.

The Divisional Commissioner reiterated that the Government of India and the UT Government are taking all possible steps for the safe return of all the students and residents.

The Ministry of External Affairs, GoI has established separate helplines in the Indian Embassies at Romania, Poland, Hungary, Slovakia to facilitate Indian citizens and address their queries depending on which border, the person concerned is moving towards; where they are being received and necessary formalities for onward journey being expedited.

The Divisional Commissioner office told that till now a total of 61 students have already reached their native places in Jammu region & another 29 students are in transit.