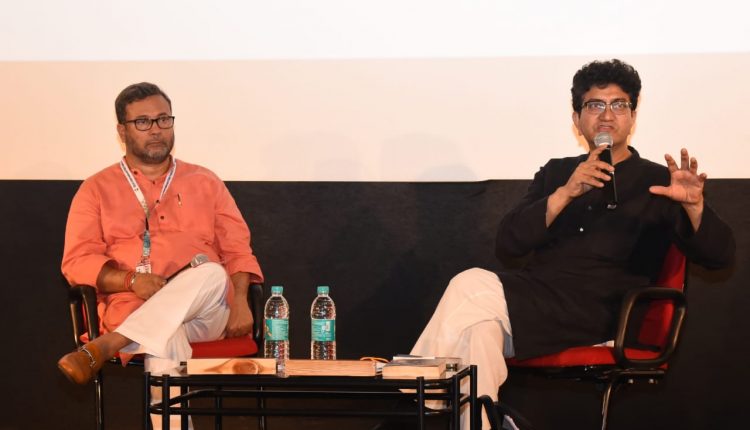 New Delhi: Choose to inspire than to do purely what you like. This is what noted lyricist and Chairperson, CBFC, Prasoon Joshi has to say to aspiring artists who seek to transform the world through cinema. “Given a choice between writing something I like and writing something that would inspire people, I will without doubt choose the latter. It is about being society-centred rather than being self-centred.” Shri Joshi said this at a Masterclass on Filmmaking, held on the sidelines of the 52nd edition of the International Film Festival of India, being held in Goa in a hybrid format, during November 20 – 28, 2021.

Speaking about his style of filmmaking, Shri Joshi characterized it as that of a viewer who beholds things from a certain vantage point, staying authentic to one’s craft.

The artist lauded the festival for honouring and mentoring budding artists through the 75 Creative Minds of Tomorrow competition, launched as part of the Azadi Ka Amrit Mahotsav. A member of the Grand Jury for the competition, he opined that diversity among filmmakers is very important for diversity to reflect in films. He appealed everyone to learn at least one Indian language other than their mother tongue.

Shri Joshi spoke of the need to remove the notion that success in the film sector is subject to the vagaries of chance. “The chance factor in film making should be reduced. This will happen when we start making films by design, not by default. Filmmaking is a serious business with potential to provide business to large number of people, hence we should try to erase the image of film making being akin to gambling.”

Shri Prasoon Joshi highlighted the need for a commensurate focus on both the practical and the artistic aspects of filmmaking. He cited the example of famous music director A.R. Rahman, who he says is equally conversant with the art as well as the technology of music industry.

Speaking about the trend of iconoclastic movies becoming popular, Shri Joshi said that it is necssary to also bring out the positive aspects of society. “There is beauty in sculpting tradition and beliefs, there is need to portray the positive things too in society.” He gave the example of a mother who sacrifices many of her cravings and desires, thereby restricting her self-expression so that her offspring does not suffer from any illnesses. “Saying that only those movies which challenge popular beliefs succeed is to oversimplify the truth.”

While speaking about the power of words, Shri Joshi said that words encapsulate culture. The term Darshan used for philosophy is not wholly correct as it involves firsthand truth in it, which can be missing from philosophy.

Speaking about the approach of CBFC, he said that the Board believes in resolving disputes through deliberations. “We start with the assumption that no true filmmaker wants his films to hurt anyone. We try not to be judgemental, we believe that film certifiers are also co-creators of the film as they are trying to incorporate the voices of the society”.

Replying to a query from Maharashtra’s Ajay Kantule, one of the winners of the 75 Creative Minds of Tomorrow, the veteran said that when you are connected to your roots you can maintain balance between one’s spiritual and commercial needs.