A grant of DKK 25 M from Wellcome gives hope to snakebite victims in sub-Saharan Africa of better and safer treatment.

Associate Professor Andreas Hougaard Laustsen, Head of the research group Tropical Pharmacology Lab at DTU Bioengineering, is specialized in antibody technologies and toxinology. For a number of years, Andreas has been at the international forefront of antivenom research, and is known for having led the development of the first fully human antibodies against both snake and spider venom toxins and for being the leading expert in black mamba venom.

He is excited about the possibilities the grant offers in terms of accelerating the research to develop antivenom that can neutralize the venoms from the snake species in sub-Saharan Africa that cause the most deaths and disfigurements:

“We are exultant to receive funding from Wellcome. Not only is this a major pat on the back for our research, but it will allow us to apply cutting-edge antibody technology to antivenom development. This will hopefully enable us to deliver significant health impact for snakebite victims by bringing recombinant antivenoms closer to the clinic,” says Andreas Hougaard Laustsen

Snakebite envenoming is a neglected tropical disease that each year affects 2.5 million people worldwide, with sub-Saharan Africa constituting one of the most affected regions across the globe. There, in particular, the burden exerted by snakebite envenoming is exacerbated by a lack of effective antivenoms.

Many victims do not receive effective treatment and are left with the prospect of death or permanent disability. As snakebite envenoming often affects young people from the most impoverished populations of developing countries, envenoming affects not only the victims, but also the victim’s family, which may lose a provider. Therefore, snakebite envenoming both has a significant public health and a large socioeconomic impact.

Current antivenoms can be manufactured to be effective in neutralizing snake venom. However, as these medicines are based on undefined mixtures of antibodies typically derived from the blood of immunized horses, they carry a significant risk of adverse reactions, as well as being costly to manufacture.Therefore, since 2016, researchers at DTU Bioengineering have been working hard to bring a new generation of antivenoms to life. These novel antivenoms, coined recombinant antivenoms, are based on fully human antibodies and nanobodies that can be manufactured using fermentation technology and which do not carry the same safety risks as conventional antivenoms.

H. C. Ørsted Postdoc Timothy Patrick Jenkins, who is in the Tropical Pharmacology Lab, is confident that the research group will achieve their goals. He says:

“In my opinion this project is the snakebite equivalent of the Apollo 11 mission of landing on the moon. The challenge is great, but we are confident that with our experience and innovative engineering approaches, we will be able to overcome it and develop a game-changing therapeutic.”

Aside from being safer and easier to produce than the current antivenoms, recombinant antivenoms may also be designed to be more effective in treating snakebite envenoming whilst covering a broad-spectrum and being effective against multiple snake species at the same time.

Snakebites happen quickly and the victims are often uncertain of exactly which species of snake they have been bitten by, and even if the snake is correctly identified the matching antivenom may not be readily available. Therefore, this new type of antivenom that can be designed to cover a broad spectrum of snake species has great potential to safe lives and limbs of the victims.

The project’s direct link between using biotech to better the lives of people highly motivates Postdoc Charlotte Rimbault, who says:

“It is exceptionally scientifically stimulating to be able contribute to such an ambitious project – and to be able to solve pending societal problems in the developing world using cutting-edge biotech approaches.”

For the next five years, Andreas and his team will be putting the Wellcome grant to use by developing broadly-neutralizing panels of human antibodies and nanobodies against the key toxins from all of the medically most important snake species of sub-Saharan Africa. By neutralizing these key toxins, the main clinical manifestations in human envenoming cases can be avoided. The researchers hope that at the end of the project to be ready to enter into clinical development. 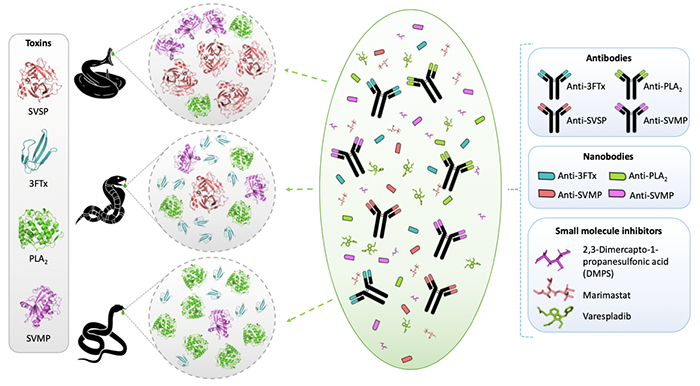 Figure 1: Conceptual illustration showing how DTU researchers will develop a broad-spectrum recombinant antivenom that can neutralize venoms from multiple snake species. It is expected that such an antivenom will be based on human antibodies, nanobodies, and selected small molecule inhibitors, which in combination may be able to neutralize different types of snake venoms that each contain large panels of different types of toxins.

Andreas Hougaard Laustsen is specialized in antibody discovery, toxinology, and snakebite antivenom. He is a Fellow of the Young Academy of Denmark and Europe, a Villum Young Investigator and PI for the ERC Starting Grant MABSTER. He obtained his PhD from the University of Copenhagen and his M.Sc.Eng. from the Technical University of Denmark. Andreas is also a co-founder of six biotech companies and is recognized as Denmark’s Coolest Engineer, a Top 10 Biotech Entrepreneur under 30 in Europe 2016, a Top 6 Entrepreneurial Academic under 35 in Europe 2017, a Top 30 under 30 by Forbes 2017, and a Top 35 Innovator under 35 by MIT Technology Review 2017.

Timothy Jenkins is an H.C. Ørsted COFUND fellow at the Tropical Pharmacology Lab, working with antibody technologies and toxinology. He is particularly focused on implementing alternative protein scaffolds, such as DARPins and nanobodies, as well as cutting-edge bioinformatic and AI tools in his therapeutic discovery campaigns. He was recently awarded the Otto Mønsted Foundation’s researcher prize, ‘The Bright Idea’.

Charlotte Rimbault is a postdoctoral researcher at the Tropical Pharmacology Lab. She is specialized in antibody mimetics, such as monobodies, and she is particularly interested in developing antibodies or mimetics with unique biophysical properties allowing them to be more efficient.