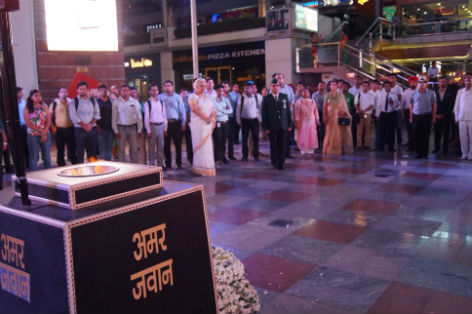 Gurugram: DLF Foundation observed Kargil Vijay Diwas at Cyber Hub on Wednesday to pay homage to the martyrs and the brave soldiers of the Kargil War in collaboration with NGO Citizen 4 Forces.

A Wall of Fame bearing martyrs’ name and photographs was erected to pay homage to those who laid down their lives in the war. Amar Jawan Jyoti was also lit to pay tribute to the soldiers.

Students from Ridge Valley School, Gurgaon, invoked the spirit of patriotism through their heartfelt singing, and two dance troupes reminded the crowd of India’s cultural riches.

DLF Foundation Executive Director Col. Prakash Tewari said: “On Kargil Vijay Diwas, I bow to every brave soldier who fought for India till their last breath. The Victory day is an apt occasion to honour these brave soldiers and their families who sacrificed their lives for their country. Their heroic sacrifices will always inspire us.”

Living legend Mr. Lakhwinder Singh exhorted the youth to join armed forces and serve the country. “Lead a life unparalleled to any other services in the country by joining armed forces,” he said.

Four Odissi dancers performed Vande Mataram while a group of young Sambalpuri dancers brought a light touch to the proceedings. The ceremony concluded with a musical tribute-a band performance by Citizens 4 Forces.

India to have 600 million broadband connections by 2020: Manoj Sinha