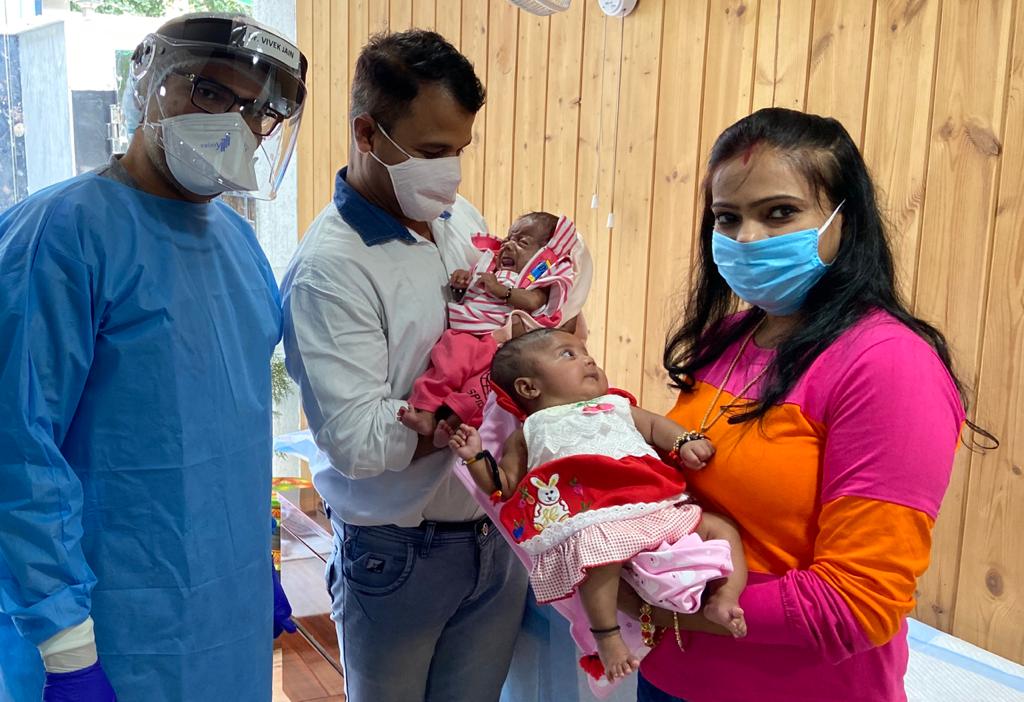 New Delhi: Miracles during the times of the pandemic are indeed rare but when they do happen, it is a celebration of the indomitable human spirit and its resilience which can survive the worst of odds. Doctors at Fortis Hospital Shalimar Bagh successfully performed a rare feat, treating three critical patients – a mother and her premature newborn twins. Mrs. Soni underwent a dual surgery, wherein an intestinal blockage was successfully removed, and a C-section was performed, with her giving birth to twins who were 14 weeks premature. While both the babies miraculously survived, one of them developed complications which were successfully mitigated by a team of doctors led by Dr. Vivek Jain, Director and Head of Department, Neonatology, Fortis Hospital Shalimar Bagh. Despite the challenges posed by the COVID 19 pandemic and the hospital being a dedicated COVID facility, Fortis doctors managed to save three precious lives.

Mrs Soni, was 26 weeks pregnant with twins and was referred to the hospital with an intestinal obstruction. On presentation, initial conservative measures were adopted to relieve the obstruction and prolong the pregnancy. However, these proved to be futile. The patient needed to undergo two surgeries simultaneously – one to remove the blockage and a c-section to deliver the twins she was carrying. Since the babies were just 26 weeks old, there was a very high chance they would not survive. Mr. and Mrs. Soni were counselled regarding the same, however the dual surgery needed to be conducted as Mrs. Soni was in danger of losing her life. Post the extremely risky surgeries, Mrs. Soni and her twins survived.

Dr. Vivek Jain, Director and Head of Department, Neonatology, Fortis Hospital Shalimar Bagh said, “At the time of delivery, the twins were stabilized via ventilator support and medication for lung maturation and customized artificial nutrition was provided. However, by the third day, one of the twins developed complications, an intestinal perforation, much like the initial condition of the mother. An urgent surgery was required, however since the baby weighed only 1000 grams and was premature, the chances of survival were minimal. The first surgery was conducted, and a pouch was made on the side of the stomach and the intestine was left to heal. After 6 to 8 weeks another surgery was performed, the hole in the intestine was closed and it was reconnected to itself. The time between both the surgeries passed slowly and excruciatingly, the baby was fighting to live and had developed severe distress, sepsis, respiratory failure, and hypotension. However, against all odds, the baby survived and twelve weeks after his birth, he was handed over to the parents. It was nothing short of divine intervention that this baby, who had been born prematurely and had undergone two intensive operations, had come out thriving.”

Mr. Soni, father of the twins said, “I thought I was going to lose my wife and our unborn children. I was frantic and had lost all hope. The only respite I had was to keep praying. Thankfully, the doctors at Fortis Shalimar Bagh managed to save the lives of my children and my wife. Every day, my wife and I watched our child fight for his life. It was a painful time, but we have emerged from it and our baby is stronger than ever. Dr. Vivek Jain and his team fought for our child and because of their dedication, sincerity, around the clock monitoring, we are taking both our babies’ home. I cannot thank him enough. He and his team have performed nothing short of a miracle.”

Mr. Mahipal Bhanot, Zonal Director, Fortis Hospital Shalimar Bagh said, “When this case came to us, our hospital had already been earmarked as a dedicated COVID 19 facility. Operations were underway to prepare the hospital for the influx of COVID patients. We were short on manpower, resources and were facing several restrictions. However, we admitted Mrs. Soni, stringently adhering to all protocols and guidelines laid down by the ICMR, State and Central Government. The staff which tended to her was completely different from the staff working in the COVID wards. Despite the challenges, our doctors persevered and ensured that all the patient’s needs were addressed. We are proud of the dedication shown by our doctors and will continue to deliver our best.”

PMI Education Foundation to invest more than $1 million in Children International, equipping vulnerable youth around the world to be social change agents