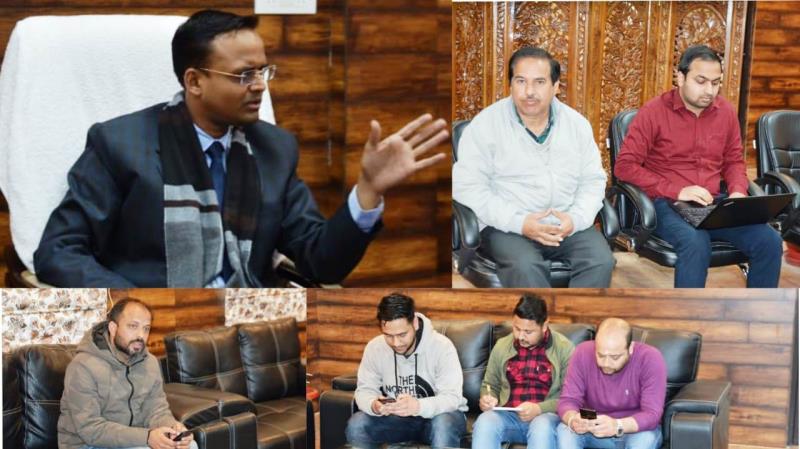 Doda: District Development Commissioner (DDC) Doda, Dr Sagar D Doifode today chaired a meeting of concerned Officers and officials to review the preparations, progress for the designing of web portal for Zimedari initiative.
Pertinent to mention here that on the directions of Lieutenant Governor UT of J&K, every district has to digitise one of the services / initiative on web portal which will be monitored by the LG himself as well as the general public. The stakeholders can also follow the updates on regular basis.
The DDC Doda informed the meeting that on every Friday the Principal Secretary to the Lieutenant Governor, chairs meeting to assess the progress being made on the implementation of directions of Lieutenant Governor.
In this regard, the District Administration Doda is bracing up for the second phase of Zimedari-Ek Ehsaas -a district level initiative aiming to improve the quality of education in the Government schools in the district by introducing the unique concept of Grading system based on already defined parameters.
The DDC informed that the district has decided to create a separate web portal for this initiative which shall be used for the continuous evaluation of the schools and also contain introductory part, objective, and modus operandi of the program. “Adding to this, all school heads shall be given separate user ID for internal evaluation on the basis of 100 given parameters covering all the domains necessary for the improvement of the Schools both in Academics as well as Non academic fields,” he said.
The entries made by the Concerned HOIs subsequently shall be monitored by the external committee at Zonal as well as at District level for final approval.
The Chief Education Officer was directed to constitute a district Level Team to coordinate with the NIC Officials for timely completion of the task.
The meeting was attended by CPO Doda, DIO NIC, ADIO NIC besides other officials of NIC and school Education Department.