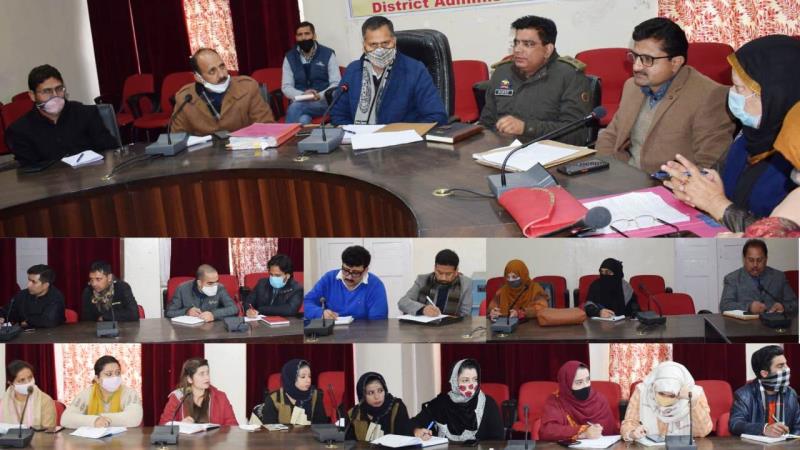 The calendar of events was discussed and finalized here at two spate meetings chaired by Additional Deputy Commissioner.

The activities during the National Girl Child Week would include awareness programmes and felicitation of girls and girl parents under the aegis of Beti Bachao Beti Padhao (BBBP).

The ADC, while chairing the meeting of District Level Task Force Committee of Beti Bachao Beti Padhao, discussed the arrangements with the concerned officers. He directed the PO ICDS to organise rallies and awareness events where the experts will acquaint the participants about the Nutrition, provisions of PC& PNDT Act and MTP act.

The day wise activities during the week long campaign were also listed in the meeting which include Slogan Writing, Poetry, Drawing & Painting competitions on the theme of Beti Bachao Beti Padhao.

The Mahila Sashakt Kendra (MSK), Childline and One Step Centre were asked to provide their services to the concerned department for the smooth conduct of the program, The involvement of the PRI members and women activists was also stressed upon to make the program more effective.

Meanwhile, the activities for National Voters’ Day were also discussed in a separate meeting. It was informed that the District Administration is going to organize a grand function to observe “National Voters’ Day” on January 25, to mark the foundation day of Election Commission of India (ECI).

The ADDC directed all the concerned officers and other stakeholders to ensure timely arrangements pertaining to their respective departments.

The meeting was informed that launch of e-epic and awareness on how technological intervention has made the registration, downloading epic and self printing of e- epic ect. easy.

It was decided in the meeting that district level function would be organized at Community Hall Doda, while similar events would be held at tehsil and booth levels across the district.

Tehsildars were directed to organize the functions with the involvement of officials of all departments and representatives of PRI’s , MC’s, Civil Society as per guidelines.