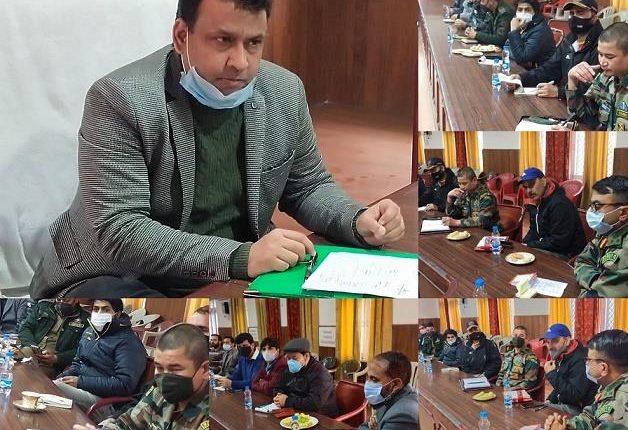 BHADARWAH: District Administration Doda is going to host Snow Skiing event at picturesque Jai Valley among other sports events under Sansad Khel Spardha- a national initiative to identify the local talent in different sports activities and encourage players to find a place at national and next levels.

In this regard, District Development Commissioner Vikas Sharma on Tuesday chaired a meeting of stakeholder departments here at Dak Bungalow Bhadarwah to discuss the modalities and arrangements to be put in place in advance for the event.

It was informed that the Sansad Khel Spardha would witness sports events in different disciplines at Panchayat, Block, District, and constituency level as per the directions of Union Minister of State, Dr Jitendra Singh.

The contours for the event were worked out in a meeting chaired by the MOS and attended by all DDC Chairpersons and DCs, held earlier, the meeting informed. It was also decided to hold winter skiing as an initiative for boosting the winter sports and tourism in mountainous Bhaderwah Valley.

The District Administration, BDA and Youth Services and Sports department pursued the proposal and discussed the plan with other stakeholders, prominently 4RR (Army) Jawahar Institute of Mountaineering, Forest, and police department to seek their collaboration.

Distt Admin Kulgam to hold series of tourism festivals at…

Reviewing the arrangements, the DYSSO informed the DC that around 3300 U-17 players drawn from 237 Panchayats and around 37 municipal wards would participate in different sports activities. He said the event would start with inter panchayat level competitions in kabaddi, wrestling, volleyball, and athletics during which the potential players would be identified for next level competition.

On the suggestion of the house, Chess and Carrom were also included in the list of games, and the concerned were directed to frame a structural plan for the hassle free conduct of the event.

The DDC directed the DYSSO to coordinate with Police, Army, and other concerned departments to finalize the plan. He was further directed to give wide publicity to the event through the medium of print, electronic, and social media to attract the eligible players for registration by or before 20th February.

The DDC also constituted a core team comprising ADC Bhaderwah, CEO BDA, and Captain 4-RR to jointly take decisions and to give wide publicity to the event so that more and more people come to witness and participate in the event, besides synergising their efforts.

The DDC further directed the GREF to clear the road to Jai-Valley for smooth and hassle free access to the venue. The DFO Bhadarwah was directed to provide firewood at the venue of the event.

Later, the DDC Doda also conducted a surprise inspection of SDH Bhadarwah and took stock of availability of doctors, staff, medicines, and working of diagnostic equipment.

One day Training programme on ‘Jungle Survival’ held at Bandipora