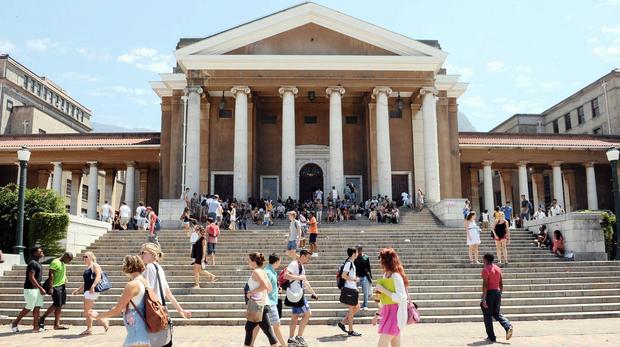 Dodging life as a gangster in pursuit of education

When Tshediso Mahange was just 13 years old, he had endured years of emotional and mental abuse at the hands of his stepfather. That’s when he made a life-altering decision: the teenager decided to pack his bags and move out of the house. With nowhere to go and no one to support him, he moved into a tiny informal structure not far from his former home.

By himself in his shack in Tsietsi in Katlehong in Johannesburg, Tshediso was surrounded by crime, gangs and drugs. The growing influence of boys his age recruited by gang leaders to lead a life of crime in exchange for money was laid bare, but he was determined to chart a new path for his life.

And his love for maths and science helped him to achieve that.

This month, Tshediso will join hundreds of University of Cape Town (UCT) graduands during a virtual graduation celebratory event – the first of its kind for the university since the onset of the COVID-19 pandemic. He will receive his bachelor’s degree in business science with a major in finance from the Faculty of Commerce on Tuesday, 15 December 2020.

“This is a bittersweet moment for me. I arrived at UCT a few years ago as a sad, lonely young boy. I didn’t have what my peers had, which was the support of a loving family.”

“This is a bittersweet moment for me. I arrived at UCT a few years ago as a sad, lonely young boy. I didn’t have what my peers had, which was the support of a loving family – I had no one. But I was determined to do my best and to succeed,” he said.

Tshediso spent the first few years of his life in his grandmother’s home; that’s where he remembers being happiest. He had never met his father, and he had never developed a close relationship with his mother either. He was just a baby when she moved to a different town for work.

When he was eight years old his grandmother passed away, and with nowhere else to go, Tshediso was forced to move in with his mother and stepfather.

“My grandmother was the only parent I knew, and I loved her dearly. Losing her was very hard for me. She taught me everything I know,” he said.

Life in his new home was anything but simple. He endured endless emotional and mental abuse at the hands of his stepfather, which altered his personality. He became withdrawn and shy and struggled to mix with children his age.

“I didn’t realise the impact it was all having on my life until one of my school teachers, Ms Tshabalala, noticed that something was wrong, spoke to me about it and with my consent secured the help of a psychologist to help me work through it all,” Tshediso said.

After his 13th birthday, Tshediso mustered enough courage to do what no boy his age should ever have to do: he moved out of his stepfather’s house.

He built himself a makeshift home and fended for himself, and every day, he said, was immensely challenging. But despite his circumstances, he was always committed to excelling at school.

“I was good at maths. My teachers would regularly sign me up to participate in maths competitions widely attended by private schools. Just participating was a great achievement for me because I attended a humble public school,” he said.

“When I won a competition, I would put the money towards my living expenses – and I needed every cent.”

Living by himself in a community ridden with crime and gangs was difficult, he said.

To escape peer pressure, he started his day at the crack of dawn. By 06:00 he entered the school gates and spent a few hours studying before his official school day started. Similarly, in the afternoon, after school, he would spend hours in the library. In this way, he dodged the negative community influences.

“I was asked numerous times to join the neighbourhood gang, but I always declined. I didn’t want that life.”

“I did this so that I didn’t have to be near those negative influences. I was asked numerous times to join the neighbourhood gang, but I always declined. I didn’t want that life,” he said.

Tshediso described Tshabalala as a “wonderful influence” on his life. He said that when she discovered that he had been living by himself, she committed to adopting him. But the process was unsuccessful.

Despite this, Tshabalala supported him financially. She provided him with R250 a month for necessities and paid for his transport to and from school. He also spent weekends at her home.

“When I was in Grade 8, Ms Tshabalala passed away. This was a sad time for me. But even in death she supported me. She discussed my circumstances with another teacher, who continued to provide me with financial and emotional support. To this day I am so grateful,” Tshediso said.

Journey to the Mother City

Because of Tshediso’s love for maths, pursuing a career in finance was always top of mind. And he was “ecstatic” when UCT notified him of his successful application. However, arriving at the university during orientation week in 2015 was like a dagger to his heart – his happiness and excitement vanished.

“As I walked onto campus with nothing but the contents in my backpack, I felt sad and alone. I looked around me and saw other first-year students surrounded by their families. Suddenly, I felt the weight of my lonely childhood,” he said.

“I realised there and then that I had no family who I could share my success with, and I spent my first day in tears.”

“I came to university to learn, and I was committed, even when things got very challenging.”

But thanks to UCT’s mentorship programme and with the help of a faculty psychologist, Tshediso learned to face the demons of his past head on. He also made a conscious decision to immerse himself in his studies and to do well.

“When I made this mind shift, everything started to fall into place, and it became a bit easier for me. I began to deal with things while focused on my end goal.”

Life at university took a lot of getting used to. Simple things like communicating in English and knowing his way around a computer were some of the challenges he encountered in the beginning. But he was committed to learning what he didn’t know and to make his experience at UCT worthwhile.

“I came to university to learn, and I was committed, even when things got very challenging. I always had good support from my campus family.”

Tshediso said that he is excited about his future. In November 2019 he was offered a permanent job at Mastercard South Africa – he grabbed the opportunity with both hands.

“In the past year, though we are dealing with a pandemic and working from home, I have learned so much and I have a good support structure too, which helps – a lot,” he added.

“Life hasn’t been easy, and I thank God that my life today is filled with what I prayed for. I am grateful to those people who helped to make it possible.”

But his biggest dream is to establish a private school aimed at children from disadvantaged backgrounds. He has started the leg work already. In high school he established Ulwazi Olubanzi Academy, a non-profit organisation (NPO) that tutors learners in maths and science. Since moving to Cape Town, Tshediso has recruited three volunteers to assist with his project.

“I want to take the NPO a step further. One day I want to be able to build a school and to help children with a similar fate as mine. That is my biggest, wildest dream, and I will work to attain it,” he said.

For now, he remains thankful each day that the path he had envisioned for his life all those years ago in his shack in Katlehong is starting to take shape.

“Life hasn’t been easy, and I thank God that my life today is filled with what I prayed for. I am grateful to those people who helped to make it possible, who pushed me and reminded me that it will be worth it. I can see now that it is,” he said.

Pervasive victim blaming in the media needs to end