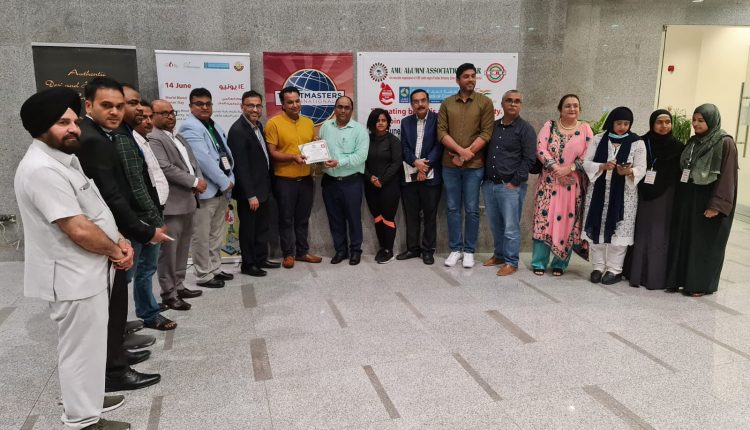 “Donating blood is an act of solidarity. Join the effort and save lives”; AMU Alumni Association Qatar, Celebrated the World Blood Donor Day

DOHA: The AMU Alumni Association Qatar an (AO) of ICBF under aegis of Indian Embassy Qatar and Toastmasters International, celebrated the world blood donor day as a part of India@75(Azadi Ka Amrit Mahotsav) Blood Donation Camp in association with Hamad Medical Corporation – Blood Donation Centre on (Tuesday) 14th June 2022. The campaign was well received by AMUAAQ and its members as well as community members who lined up to donate blood and be the part of the World Blood Donor Day. A large number of donors attended the camp.
Many dignitaries and associate members graced the occasion and donated the blood. Shri Sachin Dinkar Sankpal (First Secretary, Culture & Education, Indian Embassy Doha) attended the program as a Chief Guest while Mr. Vinod Nair (President, ICBF) and Mr. Ravishankar (CGD, Toastmaters International) attended the program as Guest of Honour. Mr. Nihad Ali (QIA), Mr. Sabith Saheer (GS, ICBF), Mr. Khaja Nizamuddin (President TWA) , Vaquas Ahmad, Rakesh Aggarwal, Swarn Singh,Mohamed Musthafa and Kuldeep Kaur Bahl, were present as special guest.
Sadika Al Mahmoudi (Medical Manager, Hamad Medical Corporation Blood Donor Center) Appreciated the AMU Alumni Qatar for associating with HMC for this noble cause and she requested to prepare a Donor directory with blood groups of all the volunteers who would be willing to donate blood during FIFA World Cup 2022 as a contingency plan, so that Hamad Medical Corporation has a backup of blood in case of any emergency by that time. She also mentioned that preparations are being made to include private healthcare providers, community organizations and embassies to meet the requirements. President of AMU Alumni Association Qatar, Dr Nadeem Jilani assured her of all possible support.

She also mentioned that enabling social and cultural atmosphere with strong solidarity facilitates development of an effective blood donor programme, it is also widely acknowledged that the act of blood donation contributes to generating social ties and building a united community.
Dr. Nadeem Zafar Jilani, president of AMUAAQ said that blood donation saves life and it is mentioned in the Quran that if you save the life of one human being it is akin to saving the entire mankind. So, by donating blood each one of us can get huge rewards. Dr. Jilani said that World Blood Donor Day is celebrated on the 14th of June every year. This day focuses on drawing attention to the importance of donating blood. It was first initiated in 2004 by the World Health Organization (WHO).

He also emphasized on the need of donating blood as it can save the lives of people. Dr. Jilani explained that “Blood donation is a safe process. Anyone can donate blood in four simple steps – registration, medical history, blood donation and refreshments. On an average around 350 to 450 mL of blood is withdrawn, which usually takes 24-48 hours to replace with the new blood volume. The red blood cells (RBC) are replaced automatically within 4 to 6 weeks.”

Mr. Sachin (Indian Embassy) advised that to ensure that everyone who needs safe blood has access to it, all countries need voluntary donors who give blood regularly. He also mentioned that extraordinary efforts during a time of unprecedented crisis highlights the crucial role of well-organized, committed voluntary, non-remunerated blood donors in ensuring a safe and sufficient blood supply during normal and emergency times. He appreciated the team to keep up the good work and encouraged the donors for noble gesture towards the humanity.
Jawed Ahmad (Chairman – AMUAAQ) Applauded the service to humanity by members, donors and supported organisation. This year’s theme is “Donating blood is an act of solidarity. Join the effort and save lives” focusing on the urgency to increase the number of donors.
Mr. Ahmad mentioned that Man With The Golden Arm’ Donates Blood That Has Saved approximately 2 Million Babies. James Harrison was recognized in 2003 with the Guinness World Record for the most blood donated by one person. When Harrison was 14, he got sick. One of his lungs had to be removed, and he needed a lot of blood.”He was in the hospital for three months and he had 100 stitches,” .After receiving 13 units — almost 2 gallons — of donated blood, Harrison knew right away that he wanted to give back. So when he turned 18, Harrison started giving blood and plasma regularly.
Lastly, Mr. Ahmad Thanked Mr. Sanjeev Sharma, Mr. Yawar Hussain, Mr. Swarn Singh, Mr. Rakesh, Mr. Vaqas, Mr. Majid, Mr. Mohamin Alvi, Poonam Sharma, Ali Imran, Vandana Raj, Sonali Thakur and connected organizations like Integral Welfare Alumni, Royal Mehfil, Al Aqsa Neon for their support for noble cause.
He ended his discussion with slogan in Hindi ( “एक कदम रक्तदान, आपके मानवता की है पहचान।” – Ek Qadam Raktdaan, Aapke Manvta kee Hai Pehchan .) means One step blood donation, your humanity is recognized.
Mr. Vinod Nair (President, ICBF) mentioned that the aim is to raise global awareness of the need for safe blood and blood products for transfusion and of the critical contribution voluntary, unpaid blood donors make to national health systems.
To motivate its members, AMUAAQ conducted a special discussion, in which Dr. Ashna Nusrat (Vice President Ladies – AMUAAQ) briefed about the World Blood donor day and emphasized that Donating blood is actually healthy as it can help treat and support people suffering from chronic diseases and complications. The importance and urgency to donate blood has more significantly increased since the Covid-19 pandemic .
Sanjeev Kumar Sharma said that he always stands with AMUAAQ for this kind of noble cause and he will continue donating blood regularly as an act of solidarity.
Mohammed Faisal Naseem (Vice President) said that with every campaign, the participation and awareness have been increasing, bringing in more donors. Seeing the response, AMUAAQ has decided to organize and support blood donation camps during FIFA 2022 as per HMC plan.
Dr Nadeem appreciated the managing committee & members Mohammad Farman Khan (General Secretary) , Farrukh Farooqi, Mamnoon Ahmad Bangash, Rizwan Ahmad,Mohammed Nayeem, Arshad Parwez, Abad Khan, Dr. Ashna Nusrat, Farhan Khan, Dr. Musharraf Shamim. Mr. Jilani also thanked Miss Alhena Ahmad and Master Yusuf for handling the registration process under the guidance of Ghazala Yasmeen and Dr. Shaima Sadaf.
As a token of appreciation each blood donors and organization was presented with the certificate from AMUAAQ while Refreshments & gift bags were provided to the donors by the Hamad Blood Donation Centre.
HMC Medical Manager, Ms. Sadika Al Mahmoudi awarded certificate of appreciation to AMU Alumni Association Qatar for organising the blood donation Drive on the occasion of World blood donor day.
At the end AMUAAQ Committee thanked HMC Medical Manager and their blood donation Centre staffs for extra ordinary support for this successful Blood Donation campaign. Senior journalist of QTV, Mr. Abdul Aziz covered the occasion of World blood donor day drive deftly and encouraged the participants.