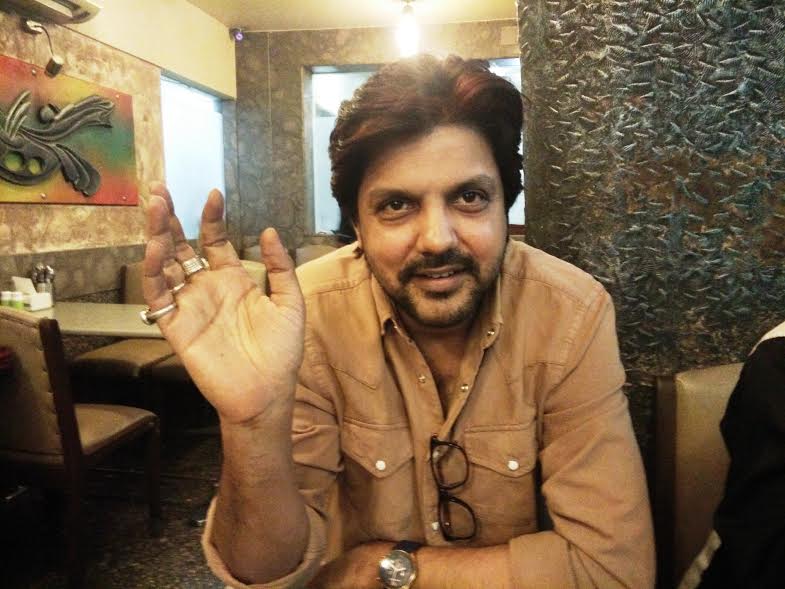 “I have done positive roles,Being a villain is much More difficult and challenging”-Neeraj Bharadwaj

Flamboyant, stylish and powerful are the three words that come immediately while speaking about versatile actor Neeraj Bharadwaj.The actor had married senior actress Upasana Singh, popularly known as Kapil Sharma’s bua on television in November 2009. And now, their marriage of seven years is on the rocks.For the past six years Bharadwaj who hails from Katihar (Bihar) had ruled the drawing rooms of millions of households as ‘Chirag Modi a.k.a Mota Bhai’ in the Hindi television drama series ‘Saath Nibhaana Saathiya’ (Star Plus).Meanwhile, Neeraj Bharadwaj, is playing a baddie in another family drama series ‘Bandhan Kachche Dhaagon Ka’ aired on Doordarshan’s National channel telecast from Monday to Friday at 2:00 in the afternoon. The serial is being liked by viewers all over.‘Bandhan Kachche Dhaagon Ka’ is directed by Manoj Singh for producer D.N. Joshi a.k.a Dharmanand under the banner of Trishakti Films. Bhuvan Joshi is the executive producer. Harmanpreet Kaur, Arun Kumar, Heramb Tripathi, Anjali Bhadoria, Antima Sharma, Somesh Singh and others also features in its cast.It have been 15 long years since Neeraj Bharadwaj made his first appearance onscreen. He has featured as hero and important roles in various Hindi and Bhojpuri films including many serials on Doordarshan and other various satellite channels. He’s not only full of youthful energy but ever willing to change with the times. We meet the actor on the sets of his serial ‘Bandhan Kachche Dhaagon Ka’ in Madh Island, Mumbai. Herewith are the excerpts of the tete-a-tete that followed:-

What attracted you to the role? Could you describe your villainy in it?

The role itself and the director and the production house….the combination was something lethal. Director Manoj Singh watches everyone’s work and appreciates it. When he narrated the role to me, I realized that the director wanted to use my years of experience as an actor to reinvent my persona. In Bandhan Kachche Dhaagon Ka I play Indrajit, the cousin brother of the family, who for money, wealth and property will take all the efforts or play any kind of mischief till I lay my hands on it. As an actor, I always get something new to perform at. My negative character is so bad that the audiences will start hating me. It is difficult and challenging to portray villainy on screen.

In a small-town saga, how has the director shaped up your character?

I have played many positive roles I am renewing it for a while. This role is powerful who has enormous arrogance for money and clout. Overall the subject has the realistic and commercial feel in it to connect with the viewers.

After your compact performance in ‘Saath Nibhaana Saathiya’ how come you do not have other projects for other channels?

I am looking at doing something good and challenging. As of now, I am going through few scripts. I do not run after money. I want something performance oriented and not be like a lamp post in any of them. I do not want to go to such weddings where only flower is thrown. Nowadays, only women are given prominence in various serials while male characters are just show pieces or fillers. I do not want to do these kinds of works. Whenever something good comes my way I will let you know.

This apart, what next on cards?

These days I am concentrating more on films. I have signed 3 Hindi films and a film each in South and Marathi languages. Even I am designing film and television serial projects for many makers too and that too in stringent budget.

There have been stories doing rounds about the divorce between your wife Upasana Singh?

It was true… At times it is not always hunky-dory on the personal front. The relationships were marred by compatibility issues and different expectations from each other. Though we tried to make the marriage work, the differences were irrevocable. She is my senior and we have worked together on numerous occasions. Our professional lives have never posed a threat to our marriage. Things are quiet as of now. I want to re-consider about this and find to give quality time to my wife.
As it is, it’s a personal matter and we do not want media intruding in that space.

Like your most counterparts, will you be joining politics?

I will join politics in 2022. I strongly believe in astrology. It has a great role in my life. The planets and the star sign also influence one’s life too. Accordingly, I will definitely come into politics.

Amidst all the evolution, will we see Neeraj Bharadwaj joining the production and direction bandwagon too?

Over the last few years there are huge changes everywhere in the world. I am all for changes, always have been, and I accept them and participate in them. Changes bring in evolution and progress. But I am not interested in joining the production or direction bandwagon. I am an actor and always remain an actor.