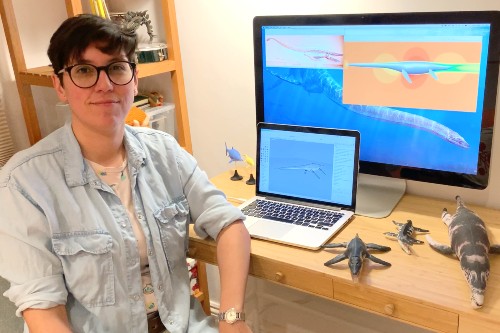 Susana Gutarra Díaz gave presentations at the Annual Meeting of the Palaeontological Association based on her PhD work about how ancient marine reptiles may have swum. Her research at the University of Bristol has made important inroads into our understanding of how ocean ecosystems worked hundreds of millions of years ago.

Attended by more than 500 people, the conference features talks and posters by students and established researchers. This year the meeting was held online.

Susana received the prize for best talk – shared with two other students – for her captivating presentation on ‘Using computer flow simulations to explore the hydrodynamics of extreme body morphology and size in derived Mesozoic marine reptiles’.

She used computer models to explore swimming performance in ichthyosaurs and plesiosaurs, two marine reptiles from the Mesozoic era, an era which began around 250 million years ago.

Susana made 3D models of several species and compared these with models of modern dolphins and whales, showing that plesiosaur bodies produced more drag than ichthyosaurs and whales or dolphins of the same mass because of their large flippers.

Some plesiosaurs such as the elasmosaurids had extremely long necks, which had been thought to be an impediment to efficient swimming.

However, Susana explained: “The drag produced by hugely long necks were compensated by increased body sizes, so in fact body size is more important than morphology in determining the drag of these specialised aquatic animals.”

Susana also shared the best poster prize with three other students. Hers was entitled: ‘The locomotory eco-morphology and evolution of body plan in Mesozoic marine reptiles.’

In this, she compared body size and measurements of the paddles and other bones in 126 species of Mesozoic marine reptiles as well as over 50 living aquatic tetrapods.

She said: “This analysis highlights key transitions in the evolution of swimming styles in these fossil animals and shows that differences in their modes of locomotion increased gradually during the Mesozoic to reach its highest point in the Cretaceous [which started 145m years ago]; this now really helps us to understand the dynamics of Mesozoic ocean ecosystems”.

Professor Emily Rayfield, head of the Palaeobiology Research Group, said: “It might seem to be impossible to work out exactly how these ancient reptiles swam, especially because we only have their fossils and they do not have any close living relatives.

“However, the principles of fluid flow dynamics are constant for all large objects in water or air, and so we can make direct comparisons from extinct sea reptiles to modern whales, and even to submarines and ships, in terms of shapes, frictional drag and likely speeds.”

Susana’s supervisor, Professor Mike Benton, added: “Bristol students often win awards for excellent presentations at international conferences, but this is the first time in forty years of these prizes that one student has secured both the best talk and best poster awards.”