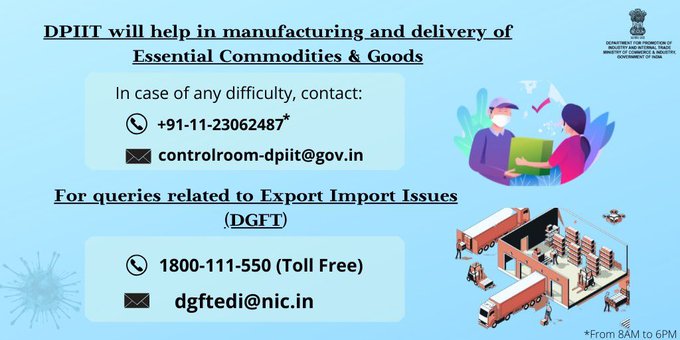 New Delhi: Department for Promotion of Industry and Internal Trade (DPIIT), under the Ministry of Commerce and Industry, had set-up a Control Room w.e.f 26.3.2020 to monitor the issues of Industry and Trade and take up such matters with the concerned State Government, District and Police Authorities and other concerned agencies. The Control Room monitors the

issues of internal trade, manufacturing, delivery & logistics of essential commodities and
difficulties faced by various stakeholders during the lockdown period to resolve any supply chain issues.

A dedicated team has been put in place to monitor and tracking the disposal of queries and to generate daily MIS reports for information of senior officers in the Department. The team also closely tracks the important queries by calling up the affected people and obtains their inputs while taking up the matter with the concerned agency. This also helps in making an assessment about the efficacy of various agencies involved in resolution of issues. This team of professionals helps senior officers to know the impact of their interventions and thus keeps everyone apprised of the status of resolution of grievances.

The queries are being received in the control room through telephone calls as well as email. Any manufacturing, transporter, distributor, wholesaler or e-commerce companies facing ground level difficulties in transportation and distribution of goods or mobilization of resources can inform to the Department at the following telephone number/ email:-

The telephone number is functional from 8 AM to 6 PM. The control room has been receiving queries regarding ground level difficulties as well as the procedural and policy issues being faced by the manufacturers, transporters, distributors, wholesalers and e-commerce companies. After registering the queries, the DPIIT control room staff forwards the same to the State level control rooms and the Chief Secretary of the State with the request to initiate necessary action and ensure that the required relief is provided to the querists at the earliest.

The queries received in the control room are forwarded to the senior officers of DPIIT who constantly monitor the issues and in case of an issue requiring urgent intervention, the same are also taken up with other officers of the State Government including the concerned District Magistrate or Police functionaries. All the senior officers of the DPIIT have been assigned specific States with which they continuously interact and urge upon the State functionaries to initiate action on pending issues. The State Government Departments such as Industry, Transport, Consumer Affairs and Food and public Distribution are also monitoring the resolution of such queries separately.

Minister of Railways, Commerce and Industry Shri Piyush Goyal quite frequently takes stock of the nature of issues raised through the control room and has been urging all concerned to initiate action necessary to ensure supplies of essential goods to the common man in every part of the country. Dr. Guruprasad Mohapatra, Secretary DPIIT along with his senior colleagues also regularly reviews the status of pending issues in the States during his meetings held through video conferences.

On 24th March, 2020, the Central Government had announced a nationwide lockdown, with a view to prevent the spread of the Covid-19 virus, while putting in place arrangements for ensuring that supplies of essential goods and services remain available to all citizens.