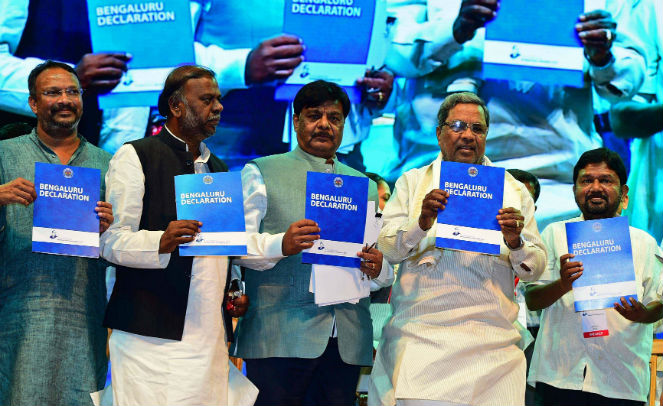 Bengaluru: The Dr. B.R. Ambedkar International Conference drew to a closetoday with a resounding response with the launch of The Bengaluru Declaration, a watershed moment for the country. The Declaration earmarks the promise for a new beginning, outlining tangible policies that will redefine the idea of India.

Honorable Chief Minister of Karnataka Shri Siddharamaiah announced the declaration stating “The government is committed to resolve the issue of reservation for SC, ST and oppressed communities in employment and promotion. In this regard, the government has formed a committee led by retired supreme court judges led by Justice Thakur and Justice Gopala Gowda. The report will be discussed with the cabinet and necessary measures taken on war footing to realize Babasaheb Ambedkar’s dream of a progressive India.The government in Karnataka has undertaken the cause of uplifting the minority communities by making the Pourakarmika appointments permanent in a phased manner. So far more than 11000 workers have benefited through this initiative.”

He further added, “Through Bangalore Declaration, we envisage a vision of India that aims to be a dynamic blueprint that addresses the needs and aspirations of all Indians. This is a starting point for an alliance of equity that promotes inclusive growth, social and economic justice for all citizens equally.”

The Conference concluded on a note of debate and hope with many sessions that continued to address the issues that are relevant to the times and pertinent to the political climate in the country.

Near.Store, a plug and play e-commerce platform for offline stores, raises USD 300,000 seed funding from Sauce.vc and other individual investors