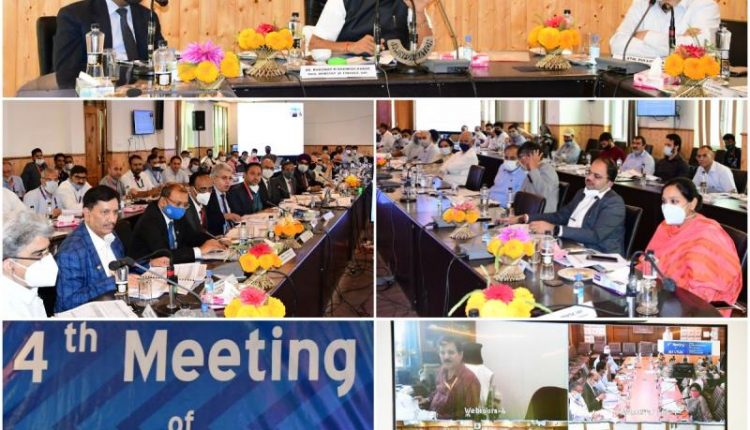 GANDERBAL : Dr.Bhagwat Kishanrao Karad, Union Minister of State for Finance appreciated the banks for their performance in higher credit delivery under various government sponsored/self-employment schemes and urged them to exert more to enable ushering in of digital ecosystem as well as financial inclusion in J&K.

While hailing J&K as the crown of country, Dr Karad stated that J&K has a unique significance for the country and that the central government will always support the J&K Government in its endeavours to improve the lives of its people.

Dr. Karad expressed satisfaction over the amount of NPAs under MUDRA and other government sponsored schemes in a predominantly retail economy like J&K, which he said was very low in comparison to other states/UTs across the country.

Stressing upon the bankers for 100% coverage of villages under financial inclusion programmes of Finance Ministry and RBI, Dr. Karad urged banks to make all out efforts to cover all the unbanked villages.

Dr A K Mehta, Chief Secretary, informed that all government payments in UT of J&K are transacted digitally.

He stated that the Government is committed to provide gainful employment to 1 lakh youth in J&K through various schemes and urged the departments and banks to synergise their efforts to achieve the target.

While elaborating, he informed that 50,000 youth under “Mission Youth” Programme shall be provided self employment opportunities during the current financial year. Besides, steps are also afoot to create 20000 jobs in the Government.

He stated that the Government has begun the process of creating employment opportunities both in the public and private sector to reduce unemployment rate to 5%.

Dr Mehta informed that “Banks for the most part maintained business continuity during the pandemic in the UT. Overall banks are doing well but need to improve greatly in certain schemes like Stand UP India, SC, ST, OBC etc.”

While stating that he was following credit delivery under CGTSME closely, he informed that there was a huge potential to create employment by suitably tapping the insurance coverage under CGTMSE.

“We have a robust financial inclusion mechanism in place, however CD ratio of private banks is not encouraging and their performance in priority sector lending also leaves a lot to be desired, “ Dr Mehta observed.

Earlier, while outlining the role of the financial sector in J&K during Covid-19 Pandemic, Chairman & MD J&K Bank, R K Chhibber said that banks in J&K responded proactively by providing uninterrupted banking services to the people of the Union Territory besides adhering to COVID 19 SOPs.

Mr Chhibber said that the targets assigned by J&K Government under ‘Back to Village’ programme have been achieved by disbursing an amount of Rs.337 Crore in favour of 20,000 Beneficiaries.

iednewsdesk Oct 23, 2021
The ability to learn novel physical movements — similar to those taught in rehabilitation for people with stroke…

Northwestern University: ‘Kids thrive on consistency.’ Get your kids…

Northwestern University: Ice skating in all seasons at the new Robert…