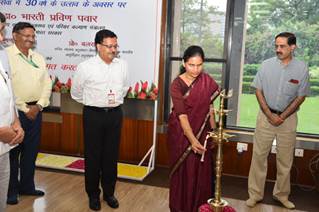 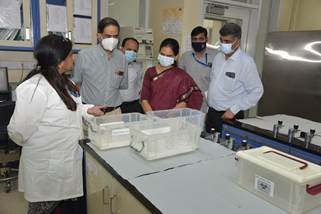 Accentuating the contribution of NIB not only in terms of repository of wisdom, knowledge, experience and expertise but in growth of our nation also, Dr Bharati Pravin Pawar, Union Minister of States said, “The consistent efforts in promoting public health, by weeding out “Sub Standard Quality” products from entering the market and developing standards for assuring quality, the institute deserves a great applause. But yet the challenges are far from over. We all are aware that substandard or spurious drugs is a global problem with respect to Health and Economic burden. Biologicals have emerged as a therapy of choice where traditional chemical drugs fail to serve the purpose. Hence, Quality testing plays a pivotal role to stop substandard biologicals from reaching the patient and adversely affecting the health.”

She further added that with its cutting-edge infrastructure, which has facilitated the pathway to unmatched excellence, NIB has been successful in maintaining the impeccable standards for its lab and animal housing facilities. The recommendations for those biological products that were found to be NSQ (Not of Standard Quality) for release in the market are very crucial, as it is directly linked with patient safety and safeguarding public health.

“NIB gives priority to Government medical supplies and procurement agencies so that there is no shortage of life-saving drugs in the Indian market. I believe this vigilance and this expertise in the field is much needed in the sensitive sector as it is where there is direct involvement of human lives. NIB has also provided a very strong support to the National Regulatory Authorities for keeping a close check on the quality of the biologicals being manufactured indigenously or imported into the country,” she noted.

Highlighting the efforts of government, Union Minister of State said, “Under the dynamic leadership of Hon’ble Prime Minister Shri Narendra Modi, we are on the path of becoming “Pharmacy of the World”. It is all because of the goodwill that the pharmaceutical sector has earned all across the globe. It becomes more of our duty to maintain the best quality of the drugs and also to keep it affordable for the masses, so that it is accessible to the poorest of poor.  It is the path towards realising the vision of our Hon’ble Prime Minister to achieve “Health for all”. Our Hon’ble Prime Minister has always believed in helping other nations even during the Corona pandemic too. India has been leading the world in the pharma industry but still I would suggest that NIB should undertake the testing of more biologicals and also extend its testing expertise in helping other countries following “Vasudhaiva Kutumbakam” philosophy of  Indian ethos.”

Union Minister of State also visited state-of-art laboratory facilities at the NIB and felicitated 28 NIB employees for their contribution to the institute over 25 years.

At the end, she requested senior officials of NIB to explore more opportunities of collaboration with other National and International Scientific Institutions and organizations in upgrading technologies and keeping abreast of scientific advances made in the field of quality assessment of Biological and Biotherapeutic products.