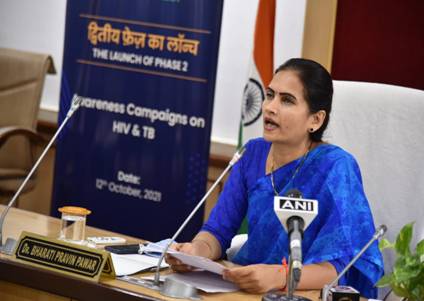 New Delhi: Dr Bharati Pravin Pawar, Union Minister of State for Health and Family Welfare launched Phase II of awareness campaigns on HIV/AIDS & TB under Azadi ka Amrit Mahotsav, here today. She also virtually interacted with students from across the country and encouraged them to contribute to nation building, as India commemorates 75th year of Independence.

Expressing her happiness on the launch of this campaign, she said, “The New India@75 has provided a platform for the States for bringing students, adolescents, youth and other stakeholders to act together in national interest. Following the launch of Phase I, I am happy to note that weeklong activities like painting, extempore debate and mask making pertaining to awareness generation of HIV/AIDS, TB and Blood Donation were organized in 25 schools and 25 colleges of each State.”

Dr Bharati Pravin Pawar congratulated National AIDS Control Organisation (NACO) for the successful launch of the ‘Phase 1 of Awareness Campaigns on HIV, TB and Promotion of Blood Donation’ on 12th August, on the occasion of International Youth Day. She also appreciated the NACO’s work in reaching out to a large number of youth throughout the country during the COVID-19 pandemic. On the occasion, she also released an e-booklet developed by NACO to showcase the variety of awareness activities conducted under Phase-1. This booklet will work as a guide to connect more students from across the country to participate in activities ahead.

Virtually interacting with students across the country, she said, “I strongly feel ‘Sabka Saath, Sabka Vikas, Sabka Vishwas and Sabka Prayaas’ are important for making our country a great nation. Your contribution is most important for ‘Atmanirbhar Bharat, a self-reliant India’ as envisioned by our dynamic Prime Minister Shri Narendra Modi ji. Our Hon’ble Prime Minister has rightly said that “Indian youth from across the country are making our nation proud in many areas such as sports, robotics, machine-learning etc.” and are working on many products which have the potential to go global.“

University of São Paulo: Theatrical practice is the subject of two...

University of São Paulo: New edition of “Between the Past and...