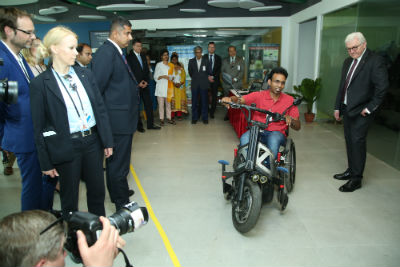 The visit of the Federal President has its roots in the long and successful association between IIT Madras and Germany and the fruitful collaboration between Indian and German higher education landscape. Among the first IITs to come up in the country, IIT Madras was established with German assistance, way back in 1959.

IIT Madras is home to India’s first university-driven Research Park, which was the perfect place for the Federal President to interact with young entrepreneurs, researchers and faculty, witness their innovations and see how the bridge between education and economy is being made. Before arriving in Chennai, he visited New Delhi and Varanasi where he interacted with students as well.

Speaking about the President’s visit, Prof Bhaskar Ramamurthi said, “We are honoured that the President of the Federal Republic of Germany has chosen to visit the IIT Madras Research Park to interact with our start-ups and see for himself the strides taken by our Institute set up with German assistance. The German influence was instrumental in the strong collaborations IIT Madras developed with industry even from its early years, culminating in the country’s first university-based Research Park and innovation ecosystem of global scale.”

Some of the start-ups incubated at IIT Madras Incubation Cell gave a demonstration of their products to His Excellency Dr. Steinmeier. The start-ups include:

Ø Neomotion (Innovative wheelchair for people with disability and elderly)

He also visited the Healthcare Technology Innovation Centre (HTIC), a multi-disciplinary R&D centre located at the Research Park. The HTIC is a joint initiative of IIT Madras and Department of Biotechnology (DBT), Government of India, and brings together technologists, engineers, doctors and healthcare professionals, industry and government to develop healthcare technologies for the country.

Since 2006, 140 start-ups have been part of IITM Incubation Cell, out of which 32 start-ups have raised Rs 707 crore (US$ 111 million) from investors. Furthermore, 63 IITM incubated start-ups are currently in the market, with a cumulative revenue of Rs 133 crore (US$21 million) generated in financial year 2016-17.

History of IIT Madras and Germany

It all started during an official visit of the then-Prime Minister Shri. Jawaharlal Nehru to West Germany in 1956, when he was offered assistance by the Government of the Federal Republic of Germany to set up a higher technological institute in India. This resulted in the signing of the first Indo-German Agreement in Bonn in 1959, for the establishment of an Indian Institute of Technology at Madras.

The first Indo-German Agreement provided for the services of German professors and five foremen, training facilities for 20 Indian faculty members and the supply of scientific and technical equipment for the establishment of the Central Workshop and 20 laboratories at IIT Madras. In 1959, the Institute was formally inaugurated. The visit of Dr. Heinrich Lubke, President of the Federal Republic of Germany, in 1962 marked the beginning of the Indo-German Technical Assistance Program. Over the years, the association has grown strength to strength. Today, IITM has collaborations with several top educational institutions in Germany and also has an Indo-German Centre for Sustainability on Campus, which aims at developing the capacity and the capability to promote sustainable development in Germany, India and South Asia.