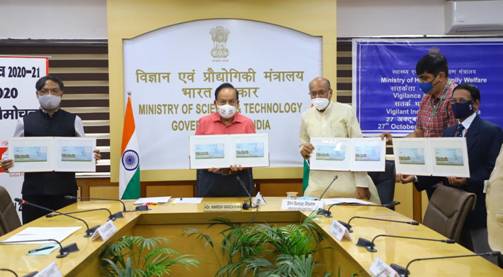 New Delhi: Union Minister for Science & Technology, Health & Family Welfare and Earth Sciences, Dr. Harsh Vardhan and Minister of State for Posts, Education and Electronics & IT, Shri Sanjay Dhotre today released the Special Cover of Department of Posts for commemorating the Golden Jubilee of Department of Science &Technology (DST) at a function in New Delhi today.

Speaking on the occasion, Dr. Harsh Vardhan congratulated DST and said “Our scientists have proved their mettle in all fields of science at international level, be it in Artificial Intelligence, Nano Technology, Data Analytics, Astro-Physics, Astronomy, Atomic Clock, and many more areas”. He revealed that today India has international collaboration with over 80 countries in various scientific areas. He recalled that as the Science & Technology Minister for the last six years, he has visited each and every laboratory in the country and has seen with pride how our scientists work tirelessly irrespective of even adverse circumstances such as the one which the present Covid-19 situation has presented, to achieve new benchmarks.

Union Science & Technology Minister also dwelt on what he called as “Prime Minister’s call for Scientific Social Responsibility, where every work of science must enable better life for the people.” Dr. Harsh Vardhan also thanked the Minister of State for Posts, Education and Electronics & IT, Shri Sanjay Dhotre for the “Historic Special Cover to commemorate the Golden Jubilee of the DST”. He also called upon the S & T Department to closely collaborate with the Department of Posts to make it more dynamic to deliver services in near real time to benefit people in remote and far-flung areas. Terming the Postal Department as the “most trustworthy friend of people”, Dr. Harsh Vardhan also recalled “how he loved to write letters to family members and receive their replies with such keenness and that he is still preserving those fond memories in trunks-full-of-letters.”

Shri Sanjay Dhotre applauded the achievements of the DST and said the “Department of Posts also feels proud in providing Special Cover for the DST highlighting its immense achievements.” He said, “Our scientists have contributed a lion’s share in India’s development”. He said, “With reach of Department of Posts all across the country, this Special Cover will enable everyone to appreciate the role our scientists have played in taking the nation forward and benefitting the poor.” He said, “Department of Posts enjoys the tag of Most Trustworthy agency of the Government of India that connects all people, even in the most adverse situations.” He requested the DST to work closely with the DoP to make it more people friendly and faster in their delivery of services.

On the occasion, Secretary Department of Science and Technology (DST) Professor Ashutosh Sharma pointed out that the support provided by DST to India’s network of scientific institutions and it’s reaching out to a wide stakeholder base, has played a crucial role in India’s international achievements in the scientific field which are evident with indicators like scoring of global third rank in scientific publications, rise in innovation index among others. This, he said, has been possible due to the contributions of scientists, students over the last 50 years which is commemorated in the postal cover. He expressed his eagerness to work with the postal department to bring about technological solutions for them.

Department of Science & Technology is celebrating its 50th anniversary from May 03, 2020 to May 03, 2021. The Department has planned several events to commemorate the Golden Jubilee year. DST was established in May 1971, with the objective of promoting new areas of Science & Technology and to function as a nodal department for organising, coordinating and promoting S&T activities in the country. The Department has the mandate and major responsibilities for formulation of policies relating to Science & Technology; dealing with matters relating to the Scientific Advisory Committee of the Cabinet (SACC); promotion of S&T and its application at all levels for overall development and security of the nation; support and Grants-in-aid to Scientific Research Institutions, Scientific Associations and Bodies, to name a few. The Department has wide ranging activities ranging from promoting high-end basic research and development of cutting-edge technologies on one hand to catering to technological requirements of the common man through development of appropriate skills and technologies on the other.

IREDA and NHPC vaccinate over 300 employees