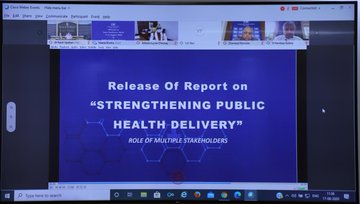 Thanking CII for organizing this event amidst the COVID pandemic, he reminded the audience that “this pandemic has given us a chance to revisit and structurally re-imagine a robust public health infrastructure for our country.” Citing India’s successful approach in containing and curing this novel health risk, he lauded the country’s capacity to turn government schemes into a broader social movement that saw “the complete eradication of small-pox and polio from a time when India contributed 60% of the global cases of polio.” He expressed hope that “the Prime’s Ministers goal of a tuberculosis free India by 2025 would be similarly achieved” with the help of industry leaders and the CII.

Recollecting his experience as the health minister of NCT of Delhi when he organized a campaign to eradicate polio with meagre funds but with the full backing and enthusiasm of prominent leaders of the industry, Dr Harsh Vardhan said that he has been witnessing “the same enthusiasm and commitment in eradicating tuberculosis bacilli from the country.”

On the TB Free Workplaces campaign, Dr Harsh Vardhan, that “India with nearly 26.4 lakh Tuberculosis cases continues to have the largest share of the global TB burden. The economic burden of TB is huge in terms of lives, money and workdays lost as it disproportionately affects the poor who live in insanitary conditions and are deprived of calories”. He deliberated on the government’s response to this problem by pointing out, “Resource allocation for TB in India has witnessed a fourfold increase in the last five years. The Prime Minister had initiated a big survey for detection of TB cases upon taking office in 2014 itself.” Every patient of TB and even those with multi-drug resistant TB are treated free as the entire cost is borne by the government while doctors are incentivized to report TB cases, he added.

The Union Health Minister expressed confidence that the government’s boost to health infrastructure through Ayushman Bharat scheme would similarly eradicate diseases like Kala-azar and Leprosy and push the Maternal Mortality Rate to near zero.

Sh. Ashwini Kumar Choubey elaborated how the Prime Minister’s efforts to provide medical care at the grassroots have ushered in “a revolutionary expansion of health infrastructure in the rural areas.”
“The intensive use of Telemedicine is clearly evident from the 1.5 lakh consultations already recorded on the e-Sanjeevani tele-consultation platform,” he added.

META in partnership with Vani Prakashan, META is bringing out the script of ‘Agarbatti’ – winner of META 2019’s Best Original Script Award