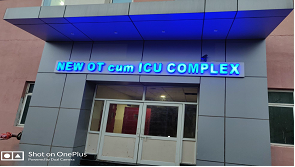 Reminding the audience of Prime Minister Sh. Atal Bihari Vajpayee’s Independence Day Address of 2003, Dr. Harsh Vardhan said, “Vajpayee ji’s vision ensured that 56 years after independence, India got to add another six AIIMS to the existing one. Aware of the constraints of setting up new AIIMS and the ever-expanding need to extend public health system to every region of India, another 75 existing institutions were envisioned to be upgraded to provide AIIMS like service through creation of Super Speciality Blocks or Trauma Centres. Pt.BD Sharma PGIMS has been upgraded keeping with this vision.”

He also spoke of former Health Minister Smt. Sushma Swaraj’s enormous contribution to the PMSSY scheme and her life long association with Haryana, “She was the youngest Cabinet member in the State and would have been very pleased at the event today.This event would remain incomplete without invoking their memory.”

Dr. Harsh Vardhan expressed deep gratitude to the leadership Prime Minister Sh. Narendra Modi who invested his personal attention and energy to take the scheme forward. “Phase III of PMSSY was announced in 2019 and work for the 75 medical colleges in the aspirational districts isalready in full swing.”

He reaffirmed his commitment to open the promised 1.5 lakh Ayushman Bharat- Health and Wellness Centres by 31st December, 2022when India will be celebrating the 75th year of independence.

Highlighting the need to be ever-vigilant from COVID, he requested the State authorities and elected representatives present to personally monitor Prime Minister’s clarion call of Jan Andolan to instil COVID Appropriate Behaviouramong the people of Haryana and make the State an example worthy of emulation.

Joining the event digitally from his ancestral home in Buxar, Sh. Ashwini Kumar Choubey expressed his elation that PMSSY is fulfilling its target of making health accessible to the remote regions of India fulfilling the much cherished dream of “Sarve Santu Niramaya”.

Sh. Anil Vijthanked the Union Government for its proactive role in strengthening the health infrastructure in Haryana. He apprised everyone that the State Government intends to open a Post COVID Care Research Facility in the campus. The State Government will also build a residential complex with 160 rooms for male students, 255 rooms for female students and 156 new staff quarters.

Smt. Padmaja Singh, Jt. Secretary (Health) and other senior officials of the Health Ministry were also present at the event.