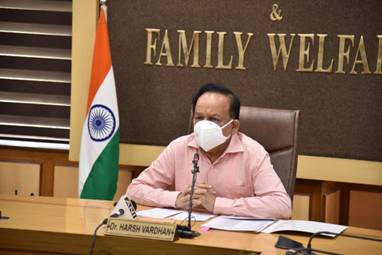 Comparing the COVID trajectory of Madhya Pradesh with that of the country, Dr. Harsh Vardhan said that “The recovery rate of India is currently around 89% while that of Madhya Pradesh is 90.55%. MP has a case fatality rate of 1.73% which is a little higher than the national average.”Pointing to the steady decline in the number of cases, he reiterated his stand that the transmission of COVID could be brought under control if everybody followed COVID appropriate behaviour.

Expressing gratitudetoPrime Minister Sh. Narendra Modi ji for launching the Jan Andolan to enhance the awareness amongst very citizen regarding the need and virtues of masking, physical distancing and regular hand hygiene, Dr. Harsh Vardhan asked the State authorities to be cautious in the coming months that coincide with the festive season and the winter months.

Congratulating the State for reducing its active case contribution to India from around 10% earlier to just 2% now, Dr. Harsh Vardhan expressed concern over the trajectory of the disease in Indore, Bhopal, Gwalior, Jabalpur, Sagar, Khargone and Ujjain. While the daily cases reported in Bhopal and Indore are more than 200, Ujjain and Sagar have a higher CFR than the rest of the State. The Minister was also informed that the State has a positivity rate of 6.17%, higher than the national average although more than 50% of its tests continue to be RT-PCR based.

The health authorities of the Stateapprised the Minister on the steps taken to contain COVID in the coming months; Standard Operating Procedureshave been released for entertainment parks and maternity wards in the State; ‘Sarthak’ app is being used for effective containment; mass gatherings and Melas during the festivities are not permitted; idol immersion to be carried out by less than 10 persons while limit of 100 persons have been put on Pandal gatherings; the ‘Sahyog se Suraksha’ Abhiyan IEC campaign launched on 15th August with 13 departments and 8 verticals is aimed at popularizing COVID appropriate behaviour in the State.

They also updated the Union Minister on the steps taken to streamline the logistics for COVID vaccine delivery and Madhya Pradesh’s unique model of converting private hospitals for public use by bearing their costs from the exchequer. Officials of the affected districts also briefed the Minister on the steps taken by them to address their emerging situations and the successes they have had in doing so.

Dr. Sujeet K Singh, Director, National Centre for Disease Control (NCDC) apprised on the trajectory of COVID in the State and asked them to be alert of influenza which peaks in the winter months.

Our Organisations should undertake Efforts to Identify more Activities to be Automated to Harness Power of Technology: Hardeep S Puri