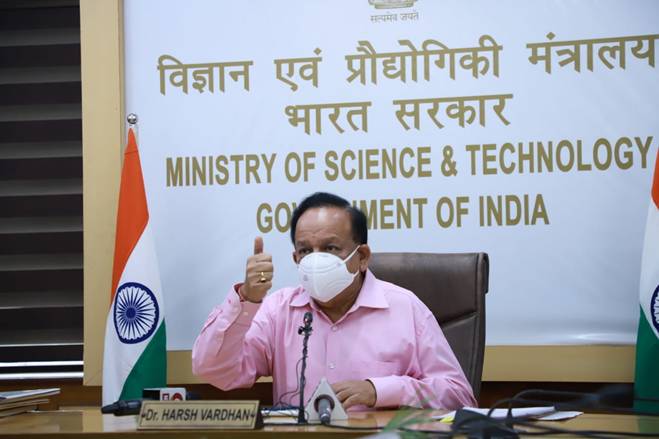 New Delhi: Union Minister for Science Technology, Earth Sciences, Health & Family Welfare Dr. Harsh Vardhan has called on the states to join the exercise of building an evidence-driven, inclusive national Science, Technology and Innovation policy STIP 2020, that would percolate to the grassroot level. Dr. Harsh Vardhan was speaking,through video-conferencing, at a meeting with State S&T Ministers for consultation on STIP-2020,which is being formulated at present.

Welcoming the participants at the first ever meeting with all State S&T Ministers together on the proposed STI Policy, Dr Harsh Vardhan said “We would like to make this truly an inclusive policy in all aspects – each and every State should become an equal partner and should share ownership and responsibility not only in formulation of this policy but also in implementing them with full rigor.” He said, “This policy aims to re-energize our Scientific ecosystem and redefine the priorities and sectoral focus so as to directly translate our efforts in Science and Technology for the benefit of our society and the economy”.

He said that the current pandemic stands witness to the immediate need for indigenous STI development and growth that can be achieved through harmonized Centre-State relationships based on the ideals of cooperative federalism. “Center-state cooperation thus remains at the heart of building a truly Atmanirbhar Bharat”, he added.

In this context, Dr. Harsh Vardhan pointed out that the consultation on STIP 2020 with state S&T Ministers is a milestone event towards building greater synergy between the Center and States and also among states. “This meeting looks forward to deliberating the processes that would bolster this inter-connectedness. To empower the STI ecosystem, there is a need to strengthen institutional linkages and joint funding systems. State S&T Councils must be reinvigorated as they remain crucial in achieving these goals,” he said.

Outlining the previous National Science Policies – Science Policy Resolution 1958, Technology Policy Statement 1983, Science and Technology Policy 2003 and Science Technology and Innovation Policy 2013, Dr. Harsh Vardhan said, “The past few years have witnessed accelerated growth placing India as a global STI leader in terms of publications, patents, and quality of research publications, per capita R & D expenditure, participation of women in extramural R&D projects and India’s engagement in emerging technologies such as nanotechnology, inclusive and frugal innovation, several schemes have been implemented by the Centre and State governments to support and stimulate R&D culture among students and young researchers, ” Dr. Harsh Vardhan pointed out.

Dr. Harsh Vardhan emphasised “Through extensive deliberations, the Science Technology Innovation Policy, 2020, proposes the institutionalization of Centre-State STI engagements and creation of pathways to successfully percolate the policy instrument to the grassroot levels. There is a need to identify national priorities that are driven by the needs of the States. Through development of formal linkages, we hope to carry out continuous highest level of engagements, extensive capacity-building exercises, technology development support programs, and other related activities,”.

He said that this would also help in streamlining resource mobilization to avoid duplicacy of efforts within the ecosystem, thereby leading to exponential growth. “This engagement is imperative at both the policy-making and implementation processes and is achievable through greater communication and collaboration between the Centre and States”, Dr Harsh Vardhan pointed out.

The formulation of STIP 2020 is driven by 4 interrelated tracks, 21 expert-driven thematic groups, and focused public discussions. The process aims to define priority issues for the national STI ecosystem, recommendations with aligned implementation strategies, expected deliverables, and a rigorous monitoring mechanism.

The Minister also informed the participants that the 6th India International Science Festival 2020 (IISF-2020) will be a mega event to be held at Digital platform from December 22-25, 2020 and invited all to participate in the IISF-2020 in a big way through the virtual media.

DST Secretary Professor Ashutosh Sharma explained the crucial role of the state-level consultation in providing valuable inputs for the policy and expressed DST’s keenness in facilitating them for creating a robust, bottom-up, and inclusive policy that shapes the New India.

Dr. V K Saraswat, Member Science, Niti Aayog expressed his enthusiasm on the formulation of STIP 2020 and stressed the need for reaching out to the last mile through the states to make it a people-centric policy.

Senior representatives from several other States participated and presented details of ongoing S&T initiatives and expressed views on STIP 2020.