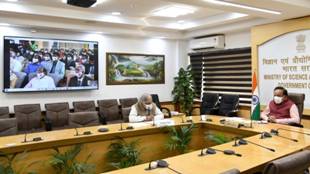 Congratulating CSIR-CIMFR for achieving various important milestones during its more than seven decades of journey, the Minister said, “It is desirable that CIMFR takes up multi-disciplinary research on mechanization and automation of mining activities with the state-of-the-art technologies in mining industry using digital mining solutions through IoT(internet of things) interventions”. Dr. Harsh Vardhan also underlined, “It is also important to pay attention to conservation of soil and biodiversity, carbon footprint, socio-economic and agro ecosystems, wildlife management plan, bio-reclamation of degraded ecosystem”.

“The country will remain dependent on fossil fuel resources for generation of electricity to meet its basic needs and those of different industries”, the Minister emphasised and further elaborated,“We need to develop cleaner routes to manage and mitigate environmental menace”. He noted, “We hope to meet the commitment made under the Paris Agreement on climate change to cut emissions and also work towards Sustainable Development Goals”.

“It is only by developing novel technologies, innovations and R&D in energy sector that we can achieve energy security and ensure that all Indians have access to energy to meet all their needs”, he said. “It is research organizations like CIMFR which can rise to the occasion and help India meet its energy requirements through their R&D”, he added.

Dr. Harsh Vardhan expressed his happiness that CIMFR has been a leading institution for Strategic and Infrastructure Sectors with contributions to the Rock Excavation Engineering Research Groupwhich has been associated in the construction of important roadways/railways, tunnels, hydroelectric projects,opencast and underground mines.“The technology solutions provided by CSIR-CIMFR have helped in expediting the construction of some important and strategic Indo-China and Indo-Pak border roads”, he noted. “CSIR-CIMFR is playing a vital role in enhancing the progress of border roads in Northern and North-East India by being a knowledge partner to Border Roads Organization”, he said.

The Minister said, “Not only in India, our scientists and engineers have provided scientific expertise internationally too for the construction of Kaladan Multimodal Transit Project (Mizoram-Myanmar), Salma Dam (Afghanistan), Tala and Punatsangchu I & II hydel projects (Bhutan)”.

Dr. Harsh Vardhan also unveiled the Logo of the Platinum Jubilee Celebrations of the Institute. Five agreements between the Institute and various other entities were signed in the presence of the Minister.