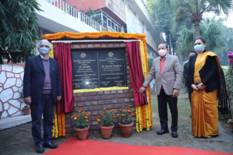 Dr. Harsh Vardhan unveiled the plaque of the new Institute , followed by plantation of saplings in the central lawn of CSIR-NIScPR campus on this occasion. He highlighted that the purpose of this merger is to combine the strength of the two institutes in a synergistic way with a VISION to become a globally respected Think Tank and Resource Centre for understanding Science, Technology & Innovation (STI) Policy Research and Communication. He emphasized that CSIR-NIScPR will serve the society with its core areas of science communication and policy research which has proved to be so important during the Covid19 pandemic. He also emphasized that evidence driven policy will play a crucial role in making ‘Aatmanirbhar Bharat’ a reality driven by S&T and Innovation.

The Minister told the audience that the merge of these two great institutions is a turning point in their history as now the repository of knowledge vested in the two institutes will combine to make the new entity an even larger and more prestigious institute in the global scientific arena. He urged all to change their perspective, and start looking at the future with ever new dreams that will lead to a “New India”.

Dr. Shekhar C. Mande, Director General CSIR, highlighted that the MISSIONof the institute is to promote STI policy studies and science communication among diverse stakeholders and act as a bridge at the interface of science, technology, industry and society which is essential to a robust S&T ecosystem in the country. He said that the merger of the two institutes is like what he called, “One plus one equaling to ELEVEN and not two”. He exuded confidence in scientists saying they will take the new Institute to ever new heights.

Prof. Ranjana Aggarwal, Director CSIR-NISCAIR & CSIR-NISTADS highlighted the key roles played by both the institutes in the past few decades. CSIR-NISCAIR, has been a frontier institute in Science Communicationpublishing popular science magazines (Vigyan Pragati and Science Reporter) and Scientific Journals. CSIR-NISCAIR is also managing the largest and oldest National Science Library and also distributes International Standard Serial Number (ISSN). It has been the custodian of the National Knowledge Resource Consortium (NKRC) which facilitates access to more than 5000 e-journals of all major publishers, patents, standards, citations, and bibliographic database.

Likewise, CSIR-NISTADS has earned its reputation in its long journey in Policy research and has a rich research experience in the area of History of Science, S & T and Society, and S&T and Innovation.It has executed projects from UNESCO and the Commonwealth Science Council, State S&T Councils and international agencies to review their respective S&T promotional schemes. CSIR-NISTADS has created a Techno-Socio-Economic platform to enable developmentand application of socially acceptable, relevant, scalable and cost-competitive products.

All the scientific institutes and laboratories of CSIR and other Government science communication and policy research agencies witnessed this program virtually through live streaming.