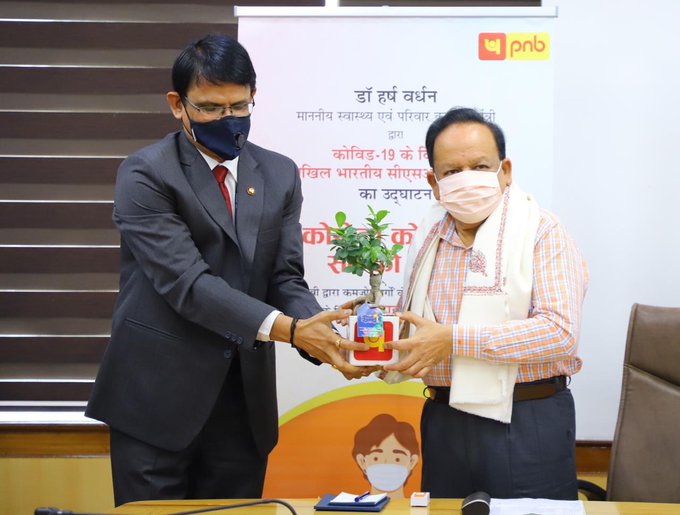 Lauding PNB’s contribution to the national cause, Dr. Harsh Vardhan said, “Punjab National Bank, India’s first Swadeshi Bank, was established in the spirit of nationalism and inspired by freedom fighters like Lala Lajpat Rai. It was the first bank purely managed by Indians with Indian capital. During the pre-independence period, the bank had the honour of having account of Jallianwala Bagh Committee which was subsequently operated by Mahatma Gandhi and Pandit Jawaharlal Nehru.”

Expressing his gratitude to PNB for taking this responsibility when the whole world is suffering from COVID19, he commented, “I am happy that PNB is supporting the efforts of the Government in fight against this Pandemic. Steps like donation in PM Cares fund and organising CSR activities for distribution of masks and sanitizers have been taken by the Bank. Use of masks and good hand hygiene promote COVID appropriate behaviour and this is the best ‘social vaccine’ we currently have against the disease. The Bank is distributing such material in 662 districts throughout the country and I congratulate PNB for their efforts.”

Recollecting the collective fight against COVID under the leadership of Prime Minister Shri Narendra Modi, he commented, “Right after China informed about the virus to the world community, the first meeting of the Committee of Experts was held within 24 hours in the Health Ministry. The country has substantially progressed from just one lab equipped to test for the novel virus in National Institute of Virology, Pune in January 2020 to about 1268 labs, as of now. Earlier years, all samples of respiratory viruses had to be sent to USA for testing.” He also added that the country will have the capacity to test one million people within the next 10 to 12 weeks.

Progress Named a Top Place to Work in India and the U.S.

Elaborating on the increased domestic capacity to manufacture masks, PPEs etc., Dr Harsh Vardhan stated: “We imported PPEs, N95 masks and ventilators earlier. However, with the initiatives taken by the Government, our entrepreneurs have been successful in turning the situation around and matching the internal demand of these items.”

Dr. Harsh Vardhan also expressed his confidence that the country will tide over the crisis, “We have effectively handled many diseases in the country. We have eradicated Poliomyelitis and Smallpox, addressed the challenge of AIDS, Nipah virus, Swine Flu and Zika. We have been able to prevent Ebola from entering the country. I am confident that with the collective efforts of all, we shall be able to meet this challenge too”. He added that India has one of the lowest Case Fatality Rate in the world. It is 2.46% today due to the effective clinical management protocols of the government, he added.

Shri S.S. Mallikarjuna Rao, CEO, PNB stated that after the nation wide appeal of the Prime Minister, they have collaborated with different stakeholders such as Public Sector Enterprises (PSEs), Micro, Small & Medium Enterprises (MSME) etc., to contribute to strengthening of the economy. They have also contributed to implementation of Prime Minister’s Atmanirbhar Bharat Abhiyaan by bringing a large section of the population under the Jan Dhan Yojana and through Direct Benefit Transfer.

The senior officials of PNB presented the Health Minister a COVID kit of masks and sanitizers, a book on the glorious history of the bank and other memorabilia.

Government is committed to ensuring that the technological shift towards ‘work from home’ is smooth: PM

Union HRD Minister to launch Manodarpan, an initiative under Atmanirbhar Bharat Abhiyan, to provide psychosocial support to students for their Mental Health and Well-being

Progress Named a Top Place to Work in India and the U.S.