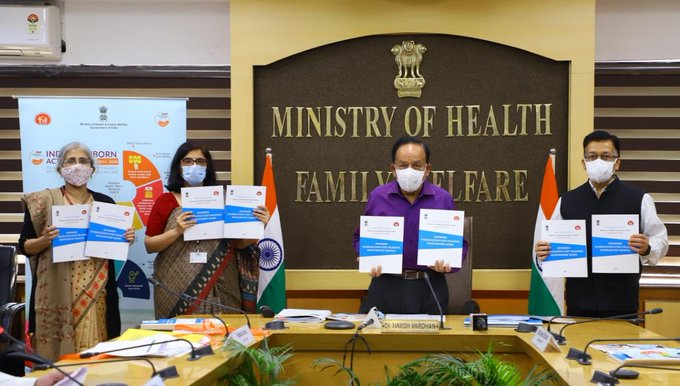 New Delhi: Dr. Harsh Vardhan, Union Minister of Health and Family Welfare today chaired an event to mark the National Newborn Week 2020, being observed from 15th through 21st November to reinforce the importance of newborn health as a key priority area of the health sector and to reiterate the commitment at the highest level.

The theme of National Newborn Week this year is ‘Quality, Equity, Dignity for every newborn at every health facility and everywhere’. At the outset, Dr. Harsh Vardhan reminded everyone, “In 2014, India became the first country to launch the India Newborn Action Plan (INAP), in alignment with the Global Every Newborn Action Plan towards eliminating preventable deaths of new-borns and stillbirths.”

Invoking the memory of former Prime Minister Sh. Atal Bihari Vajpayee ji, Dr. Harsh Vardhan said that the reduction of Newborn Mortality Rate today and dedication of an entire week for the purpose was conceptualised by him. He added that the initiatives under the RCH umbrella have got added impetus and strong motivation by the dynamic leadership of the Prime Minister Shri Narendra Modi ji.

Elaborating on the achievements he said that although there is a reduction in the statistics, one single death is a tragedy for the entire family. He added the vision of the government is that “every child should survive, thrive, and reach their full potential”. He added that the Government is committed to work towards the health and development of all newborns. “We are attentive to even the minute cause that hampers the development and birth of the newborn, or one that causes ill health and/or death of the newborn”. The Government has launched several programs for ensuring the survival and development of the neonates and newborn including the nutrition aspects which are covered under the umbrella scheme of Poshan Abhiyaan, he added.

Detailing on the various steps taken to achieve this end like the NNM Portal, SUMAN for grievance redressal he noted, “every effort should be made to prevent all avoidable newborn deaths”.

Releasing a detailed progress card on INAP targets and roadmap plan, Dr. Harsh Vardhan said that India has successfully met important targets of 2017: the set target of Newborn Mortality Rate (NMR) of 24 for the year 2017 and the strides made to fulfil the target of Still Birth Rate (SBR) of 19 by 2020. “We are now at newborn mortality of 23 per 1000 live births as per Sample Registration System (SRS) 2018 and United Nations Inter-Agency Group for Child Mortality Estimation (UNIGME) estimates and SBR of 4 as per the SRS estimates and about 14 as per the UNIGME estimates,” he added.

Highlighting the critical role of partnerships, Dr. Harsh Vardhan, in his concluding remarks acknowledged the contributions made by professional bodies like Indian Association of Paediatrics (IAP), National Neonatology Forum (NNF), Federation of Obstetric and Gynaecological Societies of India (FOGSI), Indian Association of Neonatal Nursing (IANN), Kalavati Saran Hospital, and other development partners like WHO, UNICEF, Bill and Melinda Gates Foundation, USAID, Save the Children, NHSRC, NIPI for the cause of national programmes on neonatal health.

Country Representatives, Counsellors and Presidents of the all the professional collaborators and development partners joined through Video Conference.