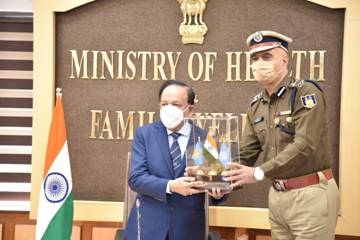 Dr. Harsh Vardhan on 79,572 CRPF personnel pledging to donate their organs after death: “They exemplify the spirit of service to the nation even after death”

Dr. Harsh Vardhan addressed CRPF jawans on an event to mark the culmination of a massive voluntary campaign that was launched by CRPF on 14th August this year to bring awareness about organ donation among its nearly three and a half lakh jawans in collaboration with All India Institute of Medical Sciences (AIIMS) New Delhi and Organ Retrieval Banking Organization (ORBO).

Expressing his elation that the positive message of the drive organized by CRPF will trickle down till the last jawan, he had noted that 79,572 soldiers, who have been conferred by CRPF as ‘Angadan warriors’, have duly filled their pledge forms to donate their eyes, skin, lungs, heart, liver, pancreas, kidneys, heart valves and intestines after death. “They exemplify the spirit of service to the nation even after death”, he added.

Dr. Harsh Vardhan in this context continued, “In our country, a large number of people die due to non-functioning of organs. According to the National Health Portal, about 5 lakh people die every year due to non-availability of organs. I also want to say here that no age, caste, religion, community, belief should ever come as an obstacle in a task as divine as that of donating organs. If a person below 18 years of age wishes to donate organ, he can do so with the consent of his parents or guardian. The goal of this campaign is to remove the fear of organ donation by spreading awareness through webinars, seminars and workshops and aiming at the root of the problem by granting acceptance to organ donation.”

Dr. Harsh Vardhan congratulated the CRPF on their exemplary service in dealing with the problem of terrorism and separatism in Jammu and Kashmir, insurgency in the north-eastern states, the Left-Wing Extremists in Central India and for conducting State and National elections impartially and efficiently.

Later in the day, The National Organ & Tissue Transplant Organisation (NOTTO), mandated under the Transplantation of Human Organs (Amendment) Act 2011 to carry out activities for promotion of organ donation from deceased persons, putting systems in place for organ donation and transplantation and training the necessary manpower and personnel celebrated the 11th National Organ Donation Day in the presence of Sh. Ashwini Kumar Choubey, Union Minister of State for Health and Family Welfare.

Congratulating NOTTO at national level, the Regional Organ & Tissue Transplant Organisations (ROTTO) at regional level and the State Organ & Tissue Transplant Organisations (SOTTO) at state level for setting up network among hospitals and tissue banks for procurement and sharing of organs obtained from the deceased donors and their timely allocation, Dr. Harsh Vardhan said, “The Ministry of Health and Family Welfare, Government of India has set up 5 ROTTOs in Chandigarh, Kolkata, Mumbai, Chennai and Guwahati to cover North, East, West, South and North-Eastern regions of the country respectively. In addition to these, 12 SOTTOs have been established in the States of Kerala, Rajasthan, Madhya Pradesh, Goa, Jammu and Kashmir, Haryana, Odisha, Gujarat, Uttar Pradesh, Bihar, Punjab and Jharkhand.” He added that the networking of the transplant and retrieval hospitals has been done to a large extent, which has started to ensure that any organ which is donated does not get wasted; every donated organ is a priceless national resource.

Observing that online pledging facility for organ and tissue donation is available via the NOTTO website (www.notto.gov.in) which makes it easier for citizens to pledge, Dr. Harsh Vardhan requested all adult citizens of India to visit the NOTTO website to pledge to donate their organs online as well as follow the Twitter, Facebook and YouTube pages of NOTTO to be a part of this new-age revolution especially in the light of the COVID-19 Pandemic. He also requested potential donors to ensure that their family and friends are onboarded during decision making as the responsibility for organ donation is likely to fall on their shoulders.

Dr. Harsh Vardhan expressing his happiness said, “With 12,666 organs transplanted in 2019, ranked third in the world as per data available on the WHO Global Observatory on Donation and Transplantation (GODT) website. This exemplary performance by states and healthcare professionals in our country should be encouraged at every step so that the curve keeps following an upward trend.” He mentioned that the National Organ Transplant Programme (NOTP) provides financial grants for establishing ROTTOs and SOTTOs, to develop new and upgrade existing retrieval and transplant centres, to set up regional and State biomaterial centres and to provide immunosuppressive therapy to Below Poverty Line (BPL) patients who have undergone organ transplantation in a Government hospital. Further, financial support is also provided for hiring of transplant coordinators by hospitals and for maintenance of brainstem dead donors, when at least one organ is shared with a Government hospital.

Stating the COVID-19 pandemic has had a hugely negative impact on the deceased donor programme in India he said, “National events such as the Indian Organ Donation Day where we recognize the selfless contribution made by deceased donors to healthcare and mankind re-instill our faith in humanity.” As a gesture of gratitude, the Minister read out the names of donors from every State of the country whose death rekindled the lives of others.

Sh. Ashwini Kumar Choubey noted that Upanishads remark that body belongs to the five elements to which it returns upon deathand said, “Associating oneself with one’s mortal body is disillusionment in Hindu scriptures. Everybody should donate their body for a nobler cause like Rishi Dadhichi.” He also exhorted putting in place a National digital portal for better co-ordination in organ retrieval and transplantation and better reporting of related figures.

Many organ recipients narrated their gratefulness exhorting everyone listening to help others in need of organs to come out of the situation of similar helplessness.

Dr. Harsh Vardhan led everyone in taking the solemn pledge of organ donation at the end of the event.
Union Health Secretary Sh. Rajesh Bhushanwas also present in the second event.