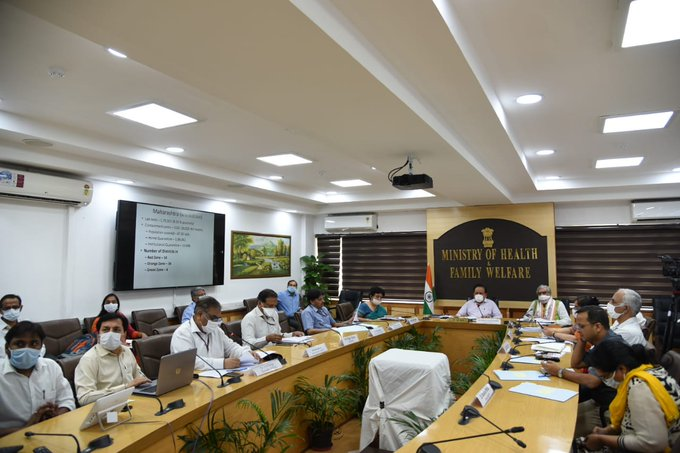 New Delhi: Dr. Harsh Vardhan, Union Minister of Health and Family Welfare held a high level meeting today with Shri Nitinbhai Patel, Dy. Chief Minister and Health Minister Gujarat and Shri Rajesh Tope, Health Minister of Maharashtra in presence of Sh. Ashwini Kumar Choubey, MoS (HFW) along with the senior officials from both Centre and the States to review the situation, actions being taken and preparedness for management of COVID-19 in both the States.

After a brief presentation on the status of COVID-19 cases in the States and its management in the States, expressing concern regarding the high fatality rate due to COVID-19 in some districts of the States, Dr. Harsh Vardhan stated, “States need to focus on more effective surveillance, contact tracing and early diagnosis to reduce high fatality rate”. He said, “Proper interventions, screening and testing of Severe Acute Respiratory Infections (SARI) / Influenza Like Illness (ILI) cases need adequate attention as this may prevent spread of infection in other areas. Implementation of effective containment strategy needs be on the top priority of the States to reduce the mortality rate. It is the need of the hour to take preventive, pre-emptive and comprehensive measures in a systematic manner and follow the protocols laid down by the Centre to prevent occurrence of fresh cases.”

It was pointed out that in some cases the patients either suppressed the information of their infection or reported late to the hospitals for treatment which may be indicative of some fear or stigma associated with COVID-19, Dr. Harsh Vardhan exhorted the States to focus on Behaviour Change Communication (BCC) among the people to address the stigma associated with community discrimination and ostracization in the community due to COVID-19, more effectively. This shall also lead to people reporting early for diagnosis and treatment, he stated.

Dr Harsh Vardhan also suggested that along with the surveillance teams in the containment areas, community volunteers may also be identified at the ward-level to spread awareness about the preventive measures like hand washing, physical distancing etc., and who can also play an effective role in removing the stigma prevailing in the society. Some districts such as Aurangabad and Pune have done this.

“The Ministry of Health & Family Welfare would provide full support and handholding to the State Governments through National Health Mission (NHM) for health systems strengthening as part of the immediate and long-term measures”, Dr. Harsh Vardhan stated. Appreciating the move by some districts where the high risk population, including the elderly and those with non-communicable diseases such as diabetes and hypertension, were identified and provided focussed treatment. He urged the States to ensure that persons aged more than 65 years along with those having any non-communicable diseases are screened on priority in the Ayushman Bharat-Health & Wellness Centres. He also pointed out that in compliance of the Guidelines already issued by the Centre, non-COVID essential health services (such as ANCs of pregnant women, immunisation drives, TB case finding and treatment, providing blood transfusion for dialysis patients, treatment of cancer patients etc.) should not be neglected. He suggested that the data available with the States on Health Management Information System (HMIS) for various diseases may be optimally utilised for risk profiling.

Dr. Harsh Vardhan also assured that additional teams comprising of officials from Centre will also deployed in the States as per their request. He also informed that the States may also take advantage from the support offered by AIIMS, Delhi for treatment guidance and clinical management of COVID-19 patients through the National Teleconsultation Centre (CoNTeC), where doctors/Specialists from AIIMS, New Delhi provide support in real time. A single mobile number (+91 9115444155) can be dialled from anywhere in the country by COVID-19 treating doctors to reach the CoNTeC, he informed.

Dr. Harsh Vardhan also stated that States need to publicise the Aarogya Setu mobile application and the Aarogy Setu Interactive Voice Response System (IVRS) by giving a missed call at 1921, which is being implemented for the people having feature phones or landlines across India. This application has been designed to keep a user informed, in case she/he crosspaths with someone who has tested positive.

Union Health Minister appreciated the best practices shared by the District Magistrates/Commissioners and other officials of various districts like “Corona Yodha Samitis” developed in slum areas of Surat (Gujarat), distribution of soaps and masks to each family, installation of Hand Washing machines in slum areas, setting up of fever clinics etc. Dr. Harsh Vardhan stated that similar practices may be internalised, shared and adopted by other districts as well, as a cohesive and collective effort is required to combat COVID-19.