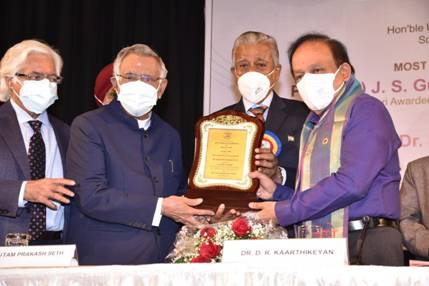 The Union Health Ministerstarted his addressby thanking the dignitaries present at the event and expressing his appreciation for Dr D. R. Karthikeyan, President AGE-CARE Indiafor taking the initiative of honouring two stalwarts of the medical profession. He also expressed his admiration for the good work that AGE-CARE India has been doing for the elderly of the country.

Dr Harsh Vardhanalso remembered the contribution and sacrifices of healthcare workers during the pandemic. He specially mentioned the contribution of mothers who endured hardships during the COVID-19 pandemic and despite knowing the risks their sons and daughters in the medical profession faced, never asked them to refuse treating COVID patients. He stated that “God is omnipresent and to prove that he is omnipresent, he created mothers”.

Detailing the success in the front of challenges posed by COVID19, the Union Minister highlightedthat as soon as the WHO was notified of the suspected case of pneumonia in China, the Ministry of Health and Family Welfare swung into action and formed an expert group within 48 hours. He also informed the audience that more than a million people are tested on a regular basis and from 1 single laboratory to test positivity at the initial stage of the pandemic, India now has more than 2000 labs across the country today.

The Minister also recalled that India exported hydroxychloroquine to more than 150 countries at the peak of the pandemic. He alsohighlighted that while India has administered 7.5 crore doses in India, more than 6.5 crore doses have also been sent to other countries.

On the commitment of the present government towards healthcare of the elderly, the Union Minister pointed out, “The elderly and people with co-morbidities are being given the priority for inoculation. The government is committed towards the welfare of all people and especially the elderly of the country.” He also informed that the Union Ministry of Health and Family Welfare already has a programme dedicated to addressing the various health related problems of the elderly called the “National Programme for the Health Care of Elderly” (NPHCE).

He reminded the audience of Prime Minister Shri Narendra Modi’s speech in 2017 wherein he called for two isms to sustain in India: humanism and nationalism. The Minister encouraged people to endeavour towards creating a “New India” based on such values and noted that organizations like AGE-CARE India can play a big role in such an endeavour.

Dr Harsh Vardhan ended his address by thanking AGE-CARE India and other dignitariesfor their contribution to healthcare in India and assured them of his government’s steadfast support in their activities.