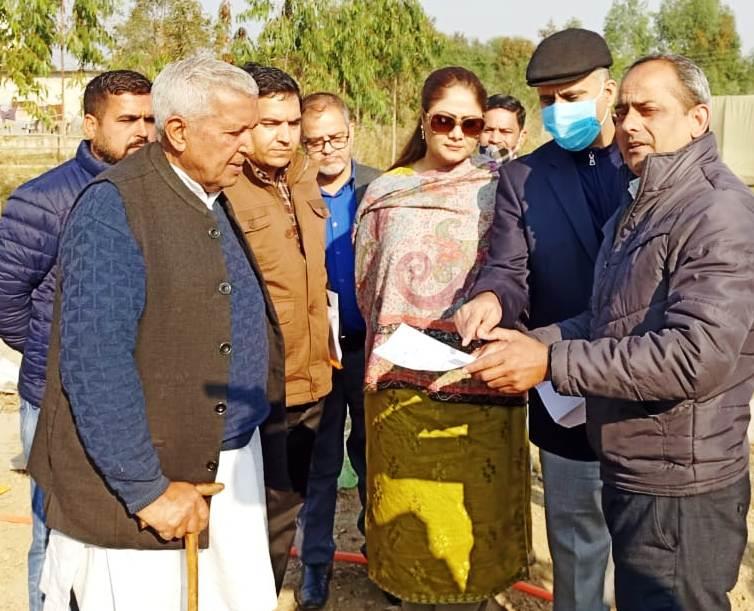 She inspected the ongoing construction work of the Common Facility Centre (CFC) for Beekeeping KVIB Cluster Samba. The project has been financed under SFURTI scheme of the Government of India MSME, which is being implemented by KVIB.

The CFC will be equipped with modern machines and help the Beekeepers in upgrading the quality of honey production, increase their income, market expansion and exploration & Technical dissemination of allied bee products.

The KVIB has conducted several contact/interaction programmes in the surrounding areas of Bari Brhamana Samba disseminating the schemes being implemented by it.

The Vice Chairperson said that the Cluster sanctioned with a project cost of Rs.133.65 Lakh shall benefit all those associated with Beekeeping w in the surrounding areas. Dr. Hina exhorted the youths of the area to come forward and establish their units under various schemes of KVIB thereby creating employment opportunities for not only themselves but for others as well.

Similarly, against the targets of 452 number of units under JKREGP involving Margin money of Rs. 904.00 Lakh, 496 units amounting to Rs. 1296.84 lakh as Margin money have been sanctioned till date. This amounts to Physical achievement of 109.73% and financial achievements of 143.46% and providing employment to 104.76% youths.

Dir Horticulture flags off group of 15 Orchardists for exposure tour

iednewsdesk Jan 20, 2022
The pledge commits universities to not using Non-Disclosure Agreements to silence people who come forward to…