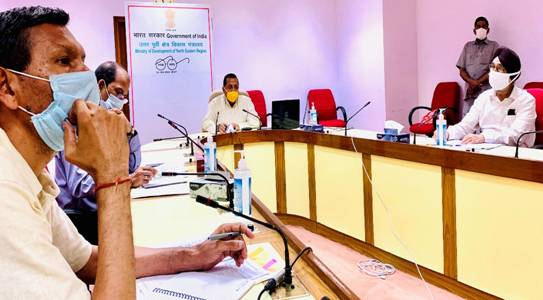 Dr Jitendra Singh calls for Bamboo Skill Centres for its full exploitation, branding, packaging and marketing in India and abroad

Welcoming the decisions of the Central Government to ban import of finished products and raising the import duty by 25 percent on raw bamboo items, the Minister said that the measures will help the domestic bamboo industries including Agarbatti making in a big way.

Dr. Jitendra Singh added that Bamboo sector can be a main pillar of ecological, medicinal, paper and building sectors in India. He was also apprised about a letter written by Union Agriculture Minister to Ministry of Housing and Urban Affairs to promote bamboo in a large measure in Housing projects in the North Eastern Region.

Dr. Jitendra Singh said that 10 commercially important species of Bamboo have been identified and the States will take up plantation of these new species on a large scale. Moreover, Arunachal Pradesh, Sikkim and Mizoram have been found suitable for Moso Bamboo cultivation widely used in Agarbatti industry. He also directed the North Eastern Development Finance Corporation Limited, Nedfi to undertake a comprehensive Bamboo Study in coordination with other stakeholders and identify project profiles at the earliest.

Dr. Jitendra Singh reiterated that Bamboo sector will be one of the important components of India’s Post-COVID economy and a vital pillar of the Atmanirbhar Bharat Abhiyan in the North Eastern Region. Underlining the unexpected potentials of this sector and being neglected for the last 70 years, he said that the Present Government has the capacity and the will to unlock its potential to the highest level as 40 percent of all Bamboo resources lie in North-Eastern Region in the country.

The Minister said that the sensitivity with which the Modi government views the importance for the promotion of Bamboo is evident from the fact that it has amended the century old Forest Act by taking home grown bamboo out of the purview of the Forest Act, in order to enhance livelihood opportunities through bamboo.