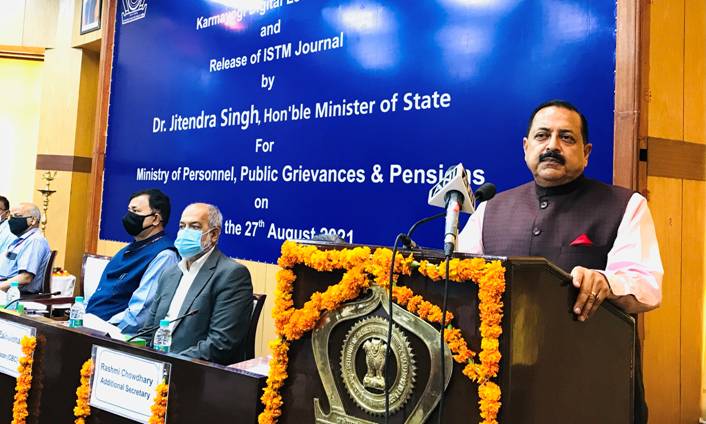 Speaking on the occasion, the Minister said, this digital learning platform will help further extending the citizen centric reforms initiated by the Government under leadership of Prime Minister Shri Narendra Modi. He said the Government’s most ambitious reform ‘Mission Karmayogi’ is meant to upgrade the skills of Central Government officers and personnel.

Dr Jitendra Singh said, the path-breaking initiative has been taken to shift the working and functioning of the Civil Servants from ‘Rule to Role’, so that they are equipped to perform the tasks assigned to them. Mission Karmayogi aims to create a dedicated work force not only of the Civil Services but more than that, it would serve the cause of the citizen at large. Such training modules will also be replicated at different State and Union Territory level also in due course, he added.

Dr. Jitendra Singh lauded the ISTM for releasing 75 courses with a running time of 75 hours of digital content on the Karmayogi Digital Learning Lab platform. He said this capacity building celebrates the 75th year of India’s Independence. He said the Narendra Modi Government has indulged in large scale administrative reforms and introduced a slew of Best Practices in delivery of services in line with the Prime Minister’s vision of a ‘New India’. Scrapping of Interviews for certain posts has not only made the recruitment process transparent, but also furthered the goal of Good Governance leading to ‘Ease of Living’ for the citizens.

The National Programme for Civil Services Capacity Building (‘NPCSCB’) – “Mission Karmayogi” was approved by the Government on 2nd September, 2020 with the objective of enhancing governance through Civil Services Capacity Building. NPCSCB has been carefully designed to lay the foundations for capacity building for Civil Servants so that they remain entrenched in Indian Culture and sensibilities and remain connected, with their roots, while they learn from the best institutions and practices across the world. The training of Civil Servants at various Academies is being restructured to include optimum use of the digital learning platform of Integrated Government Online Training (iGOT).