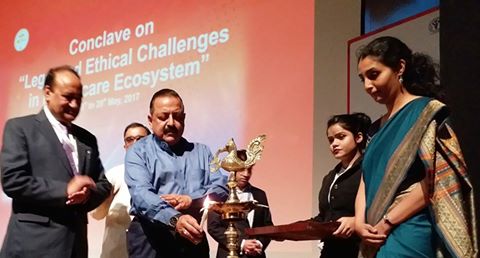 The Conclave, organized by the All India Institute of Medical Sciences (AIIMS) in collaboration with “Research Foundation of Hospital and healthcare Administration”, will have separate sessions spread over three days, exclusively devoted to different themes including Legal and Ethical Challenges in Healthcare Eco System, negligence in medical practice, Consumer Protection Act, medico-legal issues in organ transplantation, crucial decisions like euthanasia, etc.

In his inaugural address, Dr Jitendra Singh recalled that when the Consumer Protection Act was made applicable on medical fraternity about 20 years ago, there was a huge debate about it. But now, it has not only become an essential part of our lives, but has also gone one step further to get influenced by even more legalities. He said, a number of factors may be responsible for the present state of affairs, which include breakdown of rural-urban divide with a more awakened and informed rural population, mushrooming of private sector and last but not the least, change in the disease spectrum of India with shift from communicable diseases to non-communicable diseases, which involve life-long management with consequent life-long economic burden and life-long family support. All these factors, he said, are also liable to conflict situations involving ethics and legalities.

In the final reckoning, however, Dr Jitendra Singh said, the ultimate remedy to all this is the evolution of a self-code to be observed not only by doctors but also by patients and in fact by the society as a whole. Until the time that level is achieved, he said, we will have to continue working out different checks and balances.

Medical Superintendent AIIMS, Dr Shakti Gupta, who is also the Chairperson of the Conclave, in his welcome address, said that the 3-day conclave will deliberate in detail on various issues which have become a matter of concern and attention for both the medical fraternity as well as the society in the recent years. He hoped that the conclusions arrived at the three-day meet would pave the way for charting out a future course of action to meet the legal and ethical challenges while optimum healthcare.

Odisha +2 admission notice to begin from May 22

iednewsdesk Jun 25, 2022
A Northwestern University delegation recently made a five-day visit to Japan, highlighted by meetings with alumni…