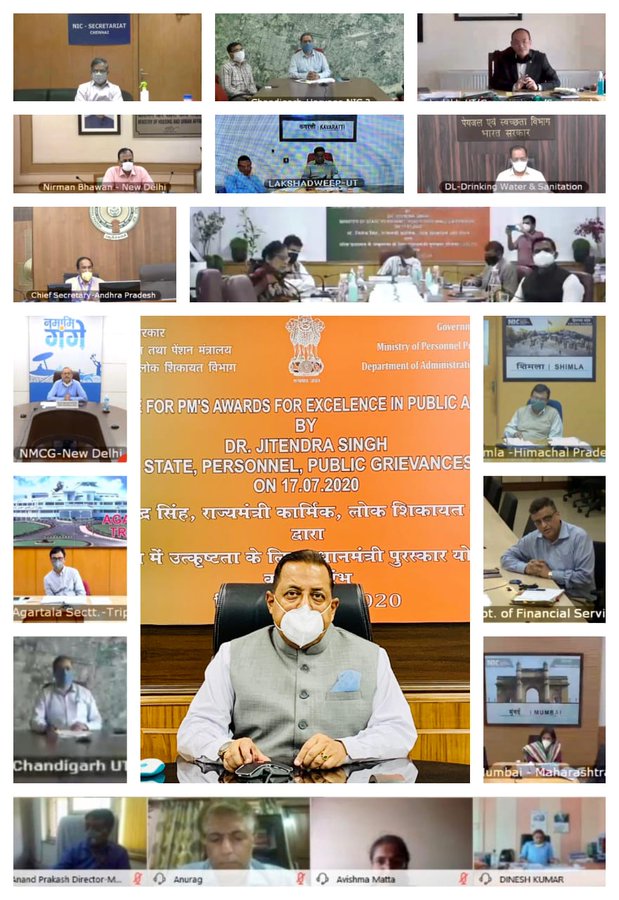 Dr. Jitendra Singh said that India’s governance model has become a Jan Andolan with people responding to the Prime Minister’s call for Jan Bhagidari in major schemes. Referring to Shri Narendra Modi’s call for building toilets from the ramparts of Red Fort on 15th August 2014, he said that within weeks of the announcement, it became a mass movement and India achieved the ODF (Open Defecation Free) status on 2nd October 2019.

He said, significant improvements in public service delivery were also witnessed in Redressal of Public Grievances and in implementation of the Aspirational District Program. Dr. Jitendra Singh acknowledged the extraordinary work done by District Collectors in fighting the COVID-19 pandemic.

The Scheme Prime Minister’s Awards for Excellence in Public Administration 2020, has been revamped to recognize the performance of the District Collectors towards outcome indicators, economic development, peoples’ participation and redressal of public grievances. Nominations have been called in four major categories – District Performance Indicators Programme, Innovation General Category, Aspirational Districts Program and Namami Gange Program. Under the District Performance Indicators Programme, District Collectors would be evaluated on their contribution to Inclusive Development through credit flow to priority sector, Promoting peoples movements – Jan Bhagidari through effective implementation of priority sector schemes of SBM (Gramin) and SBM (Urban) programs, Improving service delivery and redressal of Public Grievances. The Innovations category of the Scheme has been broad-based to provide separate award categories for innovations at National, State and District level. The period of consideration for the awards is 1st April 2018 to 31st March 2020. In all 15 Awards would be conferred under the Scheme in 2020.

Online applications shall be invited from 17th July till 15th August 2020 through the portal www.pmawards.gov.in from Districts / Implementing Units / Organizations under the various categories in the prescribed format detailing out the achievements highlighting any path-breaking innovation undertaken by any functionary/organization. The Department shall discuss and demonstrate the process for application submission to the concerned stakeholders in order to enable a smooth registration process and encourage a massive participation for the PM Awards 2020.

The launch function was attended by Dr. K.Shivaji Secretary DARPG and DPPW, V.Srinivas, Additional Secretary DARPG, N.B.S.Rajpur and Smt. Jaya Dubey Joint Secretaries of DARPG, Senior Officials from the Ministries of Finance, Housing and Urban Development, Drinking Water and Sanitation, Namami Gange and NITI Aayog. Senior Officials from all States and Union Territories participated in the launch function which was conducted by video conference.