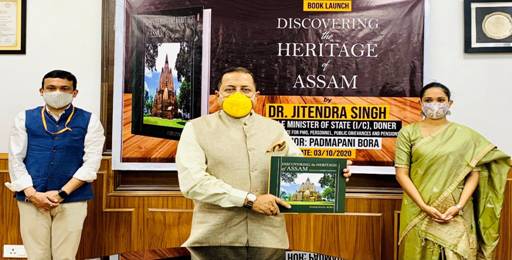 The voluminous coffee table book with pictures and photographs on glaze paper presents an absorbing compilation of heritage, faith, beliefs and traditions of different ethnic tribes and subtribes living in the largest State of the North Eastern Region.

While releasing the book, Dr Jitendra Singh congratulated its author Padampani Bora, who is by profession an officer of the Indian Revenue Service (IRS-2009 batch), but has over the years established himself as an accomplished author, specializing in the subjects reflecting diverse nuances of the North Eastern Region of India.

Dr Jitendra Singh said, while mostly it is suggested that North East should be brought closer to the rest of India, very few understand that actually there is much more that in fact the rest of India can learn from the North East. The book by Padampani Bora, he said, will help to understand the grand splendour and glory of the undiscovered facets of Assam.

Dr Jitendra Singh suggested wide circulation of the Coffee Table Book and hoped that Bora’s creation will not only remain confined to the pages of the book but would also serve as cultural and heritage ambassador of the North East for the rest of the world.

Industry leaders to address sessions on using AI for health, education, inclusion and social empowerment on 4th and 5th day of RAISE 2020 Summit

Elina Karvonen appointed development manager at the School of…

Professor Maarit Karppinen has been invited to join an International…

Lavender to be promoted on commercial lines in J&K: Director…