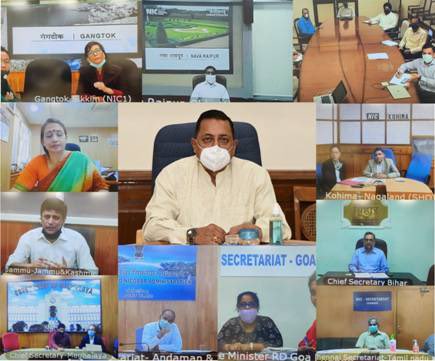 New Delhi: Dr. Jitendra Singh, Minister of State for Personnel, Public Grievances and Pensions took a comprehensive review of DARPG’s COVID19 Public Grievances Redressal Report for the period March 30 – May 4, 2020 with all States and Union Territories and expressed satisfaction with the pace of disposal.

In this period, DARPG’s national COVID 19 Public Grievances monitor (https://darpg.gov.in) had seen a disposal of 52,327 cases of which Central Ministries and Departments redressed 41,626 cases. The average Grievance Redressal time for Central Government’s COVID 19 Public Grievance cases stands at 1.45 days/ grievance. DARPG has manually analyzed 20,000 cases and feed-back calls were made to ensure citizen satisfaction. Six rounds of interactive video conferences were held with Grievance Officers of Central and State Governments. The DARPG had channelized 10,701 COVID-19 PG cases to the State Governments, which have been successfully redressed.

Dr. Jitendra Singh thanked the officials in the DARPG and the in State Governments for their immense commitment in timely redressal of COVID 19 Public Grievances. He said that the redressal of COVID 19 Public Grievances was pursued with passion not only in the technically advanced large States of Uttar Pradesh, Karnataka, Gujarat, Haryana, Kerala which managed dedicated web portals but also in North Eastern States and Union Territories of Jammu & Kashmir, Ladakh, Andaman & Nicobar Islands despite constraints in connectivity. The timely redressal of public grievances had ensured that public confidence in Government was maintained.

Dr. Jitendra Singh mentioned that during the National Lockdown several District Collectors had taken commendable initiatives, notable amongst them Collector Reasi who deferred the Vaishno Devi Yatra to ensure social distancing. Similar initiatives were witnessed in Aspirational Districts where Collectors strived to ensure food supplies and monitor village level lock down issues with alacrity. Amongst the major State level success stories, was the inter-State movement of students and handling of migrant labor issues in which the District Collectors and States played a significant part. Further States had also successfully addressed issues of hospital infrastructure and quarantine, school & higher education issues, wage and employment issues and other supply related issues.

Dr. Jitendra Singh said that Public Grievances are central to the focus of Modi government and the redressal of public grievances has risen from 2 lac cases to nearly 20 lac cases in the period 2014-20. The DARPG has been forthcoming in responding to public grievances by ensuring 90 percent of disposal rates. Further validation of quality of redressal was done through phone calls made for feedback. These initiatives had reinforced the belief that the Citizen is the centrality of Government’s odyssey.