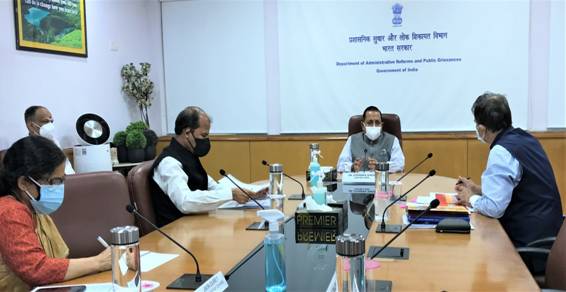 Dr. Jitendra Singh urges every official above 18 to get vaccinated at the special camp being organized by DPPW at Lok Nayak Bhavan tomorrow

New Delhi: Special Vaccination Camp for government Officials and their family Members as well as Pensioners will be held tomorrow at Lok Nayak Bhavan, here tomorrow.

This was announced by Union Minister of State (Independent Charge) Development of North Eastern Region (DoNER), MoS PMO, Personnel, Public Grievances, Pensions, Atomic Energy and Space, Dr Jitendra Singh, who urged every official above 18 years of age and their eligible family members to get vaccinated at this special camp being organized by Department of Pensioners and Pensioners’ Welfare. He also hinted that more such camps will be organized in the coming weeks.

Dr. Jitendra Singh said that despite the second wave being more virulent than the first wave, the DARPG has risen to meet the challenge by providing prompt grievance redressal. Several initiatives in grievance redressal undertaken in the first wave like the COVID-19 Dashboard, Feedback Call Centres and integration of State Portals with CPGRAMS proved useful in meeting the challenges of the second wave.

Further, the DARPG interacted with States/UT governments and the Ministries/ Departments of the Union Government to ensure timely disposal. In the 2nd wave of the Pandemic, the DARPG received 28005 grievances on the CPGRAMS COVID-19 portal and disposed of 19694 grievances. The DARPG had also operationalized the appeal mechanism under CPGRAMS where aggrieved citizens could file an appeal to the Nodal Appellate Authority in the rank of Additional Secretary/ Joint Secretary to Government of India.

Dr. Jitendra Singh said that on completion of two years of Government, Government officials should rededicate themselves to service of the Nation.

The Hon’ble Minister also complimented the dedication of Government Officials in carrying on the show without interruption during the second wave of the pandemic.

PASSING OUT OF OFFICER TRAINEES AT NAVAL BASE