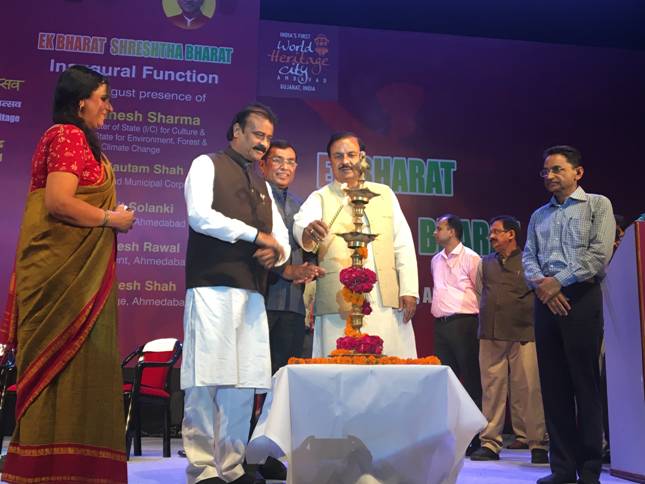 The inaugural day witnessed soulful performances such as Pandvani by Teejan Bai and Vedic chants and Bhajans by Krishna Kant Shukla and fusion performances of more than 150 folk artists, highlighting different dance forms including folk and tribal . The celebrated festival that began today, will continue to connect people of Ahmedabad with India’s rich culture till 9th October, 2017 and the same folk dances will be presented in the four cities of Gujarat i.e Vadodara, Rajkot, Somnath and Dwarka from 10th to 13th October 2017. The Seven Zonal Cultural Centers under the Ministry of Culture have been enjoined upon with the task of organizing the RSM in Ahmedabad as well as taking it to above mentioned cities under the banner of the slogan “EK BHARAT SHRESHTHA BHARAT. Dr. Mahesh Sharma and other dignitaries also visited cuisine and craft stalls and interacted with artists and artisans.

Addressing on the occasion, Dr Mahesh Sharma said, “We are delighted to bring to you the our beloved and Hon’ble PM shri Narendra Modi’s vision of Strong aand united India with respect and appreciation of multicultural and respect for each other’s rich cultural heritage exemplified by Ek Bharat Shreshtha Bharat programme through Rashtriya Sanskriti Mahotsav 2017, a cultural festival that will powerfully revive India’s heritage, like never before. The event brought together the art, artisans, dance, handicrafts, flavours and music from different regions, making itself the largest ensemble of Indian culture. While this event introduced and connected country’s youth to the various facets of our rich and vibrant culture, it also gave people from different regions a chance to showcase their talent, artworks and delicacies at a larger-than-life podium”. He further added, “We thank Shri Gautam Shah, Mayor, Ahmedabad Municipal Corporation and Dr.Kirit Solanki , Member of Parliament, Ahmedabad ( West ) for gracing the occasion ”

While addressing the gathering Shri Gautam Shah thanked Ministry of Culture for supporting the task of inscription of city of Ahmedabad on world heritage site and celebrating the same through organising Rashtriya Sanskriti Mahotsav in Ahmedabad. He also added that the dream of Ek Bharat Shreshtha Bharat will be fulfilled through organisations of such festivals.

Dr Kirit Solanki appreciated the efforts of the Ministry of Culture for organising Rashtriya Sanskriti Mahotsav. He further added that there is unity in diversity in our country and it is the Culture which binds all of them together. He also mentioned that organizing such a unique cultural event which gives people from different regions a chance to showcase their talent, artworks and delicacies at one platform. Ministry of Culture plays a very important role in preserving our rich cultural heritage and in uniting our country.

The festival showcases a titanic variety of tribal and classical art forms from different cities and towns across the country accompanied by dance, music, drama, entertainment and food. The 10- acre River front event Centre campus, came live to 10 food stalls, showcasing an assortment of regional cuisines such as ‘Litti Chokha’ from Bihar’, Puran Poli from Maharashtra , sweet delicacies such as ‘Mave ki Kachori’ from Rajasthan and many more. In addition, power- packed performances were delivered by different artists including folk, contemporary etc.

Apart from this, other activities are being organized by the Ministry of Culture during RSM as follows:

· Walled-city memorial of 19th century poet and social reformer Kavi Dalpatram at Lambeshwar ni Pol: ‘An oasis of calm, a celebration of the written word’- Book exhibition and eclectic reading of poetry and prose, and Exposition on Chhattisgarhi language and literature organised by Sahitya Academy on 8th October 2017 .( Time:4.30 am to 7.00 PM)

· Sabarmati Ashram: An exhibition on Sabarmati Shatabadi by National Archives of India ( Time:8.30am to 7.00 pm )

· Campaign on Swachhta: Street murals as part of the Swachh Bharat Abhiyan by National Gallery of Modern Art (Time: 11.00 am to 5.30pm).

Dialogue of Civilizations – IV being Organized from 8th – 15th October, 2017