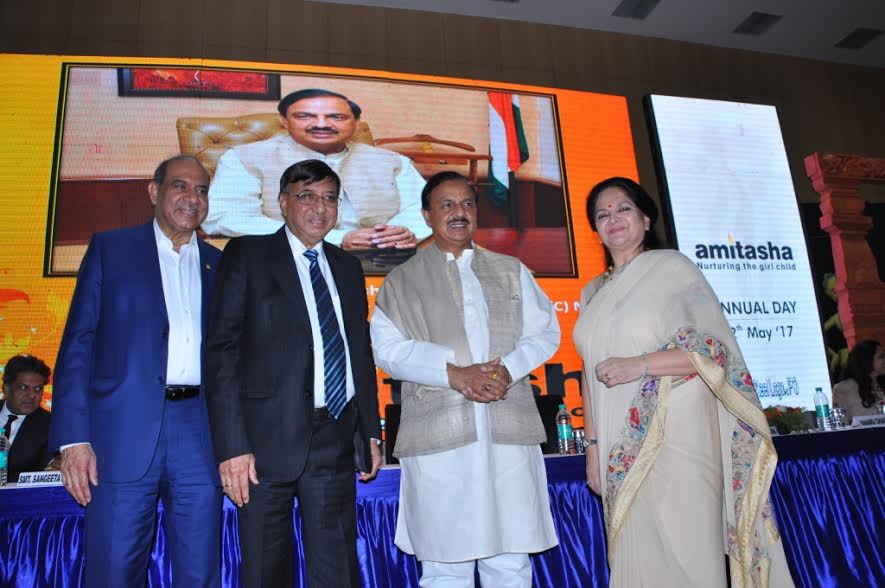 New Delhi: In order to provide an apt platform for showcasing the brilliance and exceptional talents, “Amitasha”, a school for the less privileged girl children run under the aegis of Amity Humanity Foundation, organized “Annual Day” at University Campus, Sector- 125, Noida.

Amitasha, is not just a social initiative, but a commitment to empower girls with holistic education to become worthy citizens of India. It started in the year 2000 with only 35 girl students and today, there are five Amitasha schools in Delhi and NCR with over 1200 girls enrolled in them who are provided free meals, books, uniforms and health care. The school aims to give wings to the girl children for fulfilling their dreams and realizing their potential to the fullest.

Addressing the gathering, Dr. Mahesh Sharma said that it is not important what human beings inherit from their ancestors but it is very important to ponder what they would leave behind for coming generations. He stressed that the most vital contribution to the society is the transformation one could bring into the lives of others. He opined that instead of asking favors from God; people should believe in giving, which is the real essence of life. Dr. Sharma commended Amity for nurturing Amitasha girls who would further spread their values and sanskars across the globe. He praised Amity family for their dedication towards serving the society and appreciated the great philanthropic spirit of Amity.

Dr. Ashok K Chauhan expressed his joy and pride over the achievements and accomplishments of Amitasha girls. Dr. Chauhan stressed that Amitasha girls are being nurtured and groomed to lead the world; they are equipped and are inspired to make India a better place to live for everyone.

Addressing the gathering, Dr. (Mrs.) Amita Chauhan thanked everyone for their presence which she stressed, will go a long way in motivating Amitasha girls. She stressed that it is very important that girls are nurtured with good values and ethics as they are the backbones of their families. The good values instilled in them are further passed on to the coming generations while performing their responsibilities as mothers, sisters and wives. She mentioned that Amitasha believes in instilling righteousness, good values and hard work in all the students. Motivating the students, Dr. (Mrs.) Chauhan stated that women are a reservoir of boundless energy and they are capable of achieving everything. She apprised that Amitasha students are very eager to learn and prove themselves. They just need opportunities and a platform to prove their mettle and at Amitasha, students are exposed to various extra-curricular activities like dance, music, baking etc. along with studies

Lauding the efforts of Amity towards the development of less privileged girls children, Smt. Sangeeta Jaitely suggested that Amity should open a Amity School and Amitasha near Pathankot and Jammu in order to cater to the educational needs of youth of North Punjab as well as Jammu and Kashmir. She pointed out that there are still many families in those regions which don’t believe in educating their daughters but it is important to spread awareness on education of girls. She averred that by educating a girl, one educates two families- one she is born in and other she gets married into. Smt. Jaitley praised the amazing musical performance by the students of Amitasha, which vividly brought out the love and care with which they have been nurtured.

During the occasion, Dr. Sohani Verma along with Dr. Anita Kaul- RCOG and Dr. Ranjana, Secretary, RCOG contributed an amount for Amitasha girls which will be used for their future education.

Mr. Lalit Bhasin praised Dr. (Mrs.) Amita Chauhan for bringing in a transformation in the lives of thousands of girls through Amitasha.

During the occasion, Ms. Sonia Kumari – Best All-Rounder Amitasha student from Class XII was felicitated with Dr. (Mrs) Asha Bhargava Memorial Award for her sincerity, discipline and diligence.
A Gynecologist and a Gold Medalist, Dr. Asha Bhargava was a living example of compassion, especially for the under privileged members of the society for whom she worked assiduously during her lifetime. Lt. Gen. P.D Bhargava- Group Deputy Vice Chancellor, Amity instituted this award in the memory of his late wife.

Receiving the award, Sonia Kumari expressed her gratitude towards Dr. (Mrs.) Amita Chauhan for providing her opportunities for self-advancement and also for the betterment of her family. She mentioned that Amitasha has encouraged thousands of girls from poor families to study and work towards a better life. She assured that she will always follow the vision of Dr. (Mrs.) Amita Chauhan and will help people in need.

Shikha Chaurasia- Class IX and Komal from Class X were felicitated with “Amicable Personality” Awards, Vineeta -Class IX and Annu Gupta -Class XI were given “Proficient in all subjects” Awards and Anjali – Class IX was honored with “Best in Computers” Award.

The talented Amitasha students presented a ballet, entitled “Veerangana” celebrating the power of women, showcasing their strength and wisdom over the ages.