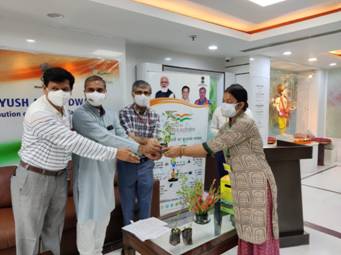 New Delhi: Ayush Ministry launched the campaign “AYUSH AAPKE DWAR” from more than 45 locations across the country today. Dr. Munjapara Mahendrabhai, Minister of State, for Ayush launched the campaign from Ayush Bhawan by distributing medicinal plants to staff. On this occasion, Dr. Munjapara addressed the gathering and appealed to adopt medicinal plants and take care of these as a part of their family.

Total 21 states are participating in the launch activities today in which more than 2 lakh saplings will be distributed. Minister of Ayush, Shri Sarbananda Sonowal will also launch this campaign from Mumbai. The campaign aims to distribute medicinal plant saplings to 75 lakh households across the country in one year. The medicinal plants include Tejpatta, Stevia, Ashoka, Jatamansi, Giloy/Guduchi, Ashwagandha, Kumari, Shatavari, Lemongrass, Guggulu, Tulsi, Sarpagandha, Kalmegh, Brahmi and Amla.

Under the Azadi Ka Amrit Mahotsav, several other programs including the launch of the Y-Break App, distribution of Prophylactic Ayush Drugs have been launched already. The lecture series for school and college students will be held tomorrow and webinar on the Y-Break app is to be organized on 5th September.