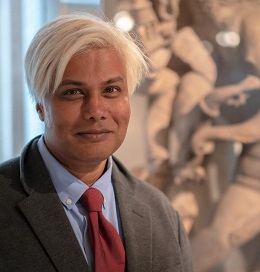 Gandhinagar: Decoding the philosophical depths of Hindu epics, the Indian Knowledge Systems (IKS) elective course by the Indian Institute of Technology Gandhinagar (IITGN) will host two lectures by Dr Vishwa Adluri on ‘The Hindu Epics from a Philosophical Perspective’ on March 31 and April 01, 2021, from 3:05 to 4 pm (IST).

Dr Vishwa Adluri is a professor in the Department of Philosophy at Hunter College, New York, and a distinguished scholar of Indian philosophy, Vedanta, Sanskrit epics, ancient Greek and Western philosophy, and theology. He has authored over a dozen articles and essays on the Mahabharata. His work mainly focuses on the reception of ancient thought—both Greek and Indian—in modernity. He authored Parmenides, Plato and Mortal Philosophy: Return from Transcendence; The Nay Science: A History of German Indology; and Philology and Criticism: A Guide to Mahabharata Textual Criticism and has edited several volumes on the Mahabharata, including Argument and Design: The Unity of the Mahabharata.

During his two lectures, Dr Adluri will guide the participants to step back from the dominant historicising approach to the Sanskrit epics, and instead lead them in adopting a new perspective to learn and appreciate them as literary works of great philosophical brilliance. The first part will cover the Western reception of the Mahabharata as a historical work and some critical views on a philosophical interpretation of the text. The second part will look at the Mahabharata’s opening books to understand how the epic itself conveys to us how it wishes to be read and how the epic’s circular narrative architecture replicates the cycles of the cosmos.

Aligarh Muslim University included as an Institute of Repute