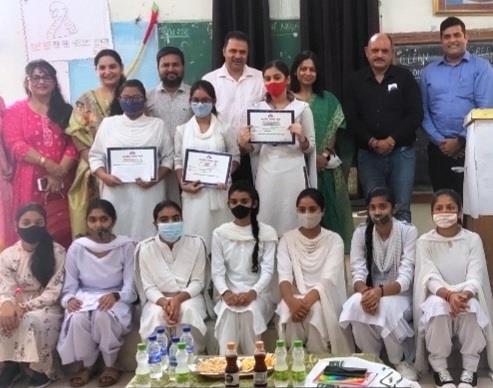 JAMMU : A first of its kind awareness workshop for students and staff members was today organized by the Directorate of School Education Jammu, in collaboration with the Bureau of Indian Standards (BIS) J&K Branch Office Jammu, here at GGHSS Bakshi Nagar.

The Bureau of Indian Standards J&K Branch Office, Jammu in collaboration with the Directorate of School Education Jammu has initiated a pilot study of introducing Standard Clubs in Government schools of Jammu division in order to spread awareness among masses/ customers through Educational Institutions considering them as major source of imparting and circulating knowledge and information.

The main aim of this event was to commemorate the forthcoming World Standards Day on Oct 14, 2021 with the theme “ Shared Vision for a better World.”

Speaking on the occasion, HR Pakhroo, stated that the development of a nation is dependent on education as education is an important tool for national character building. He also stressed that it was important for both the organizations to work together and harness the skills to make education more relevant in present times.

Nisha Bura chaired a powerpoint presentation on history and present activities being undertaken by Bureau of Indian Standards and the goals to be achieved followed by an open discussion in which different participants interacted with one another.

Meanwhile, different competitions among students of Standard Clubs were organised in the school premises like Essay writing, Slogan Writing and Poster Making, which were evaluated by jury members and awarded the winning students with certificates and cash prizes.